Kumtor Gold Company is committed to the overall development of the region it operates. The company has been doing for years its utmost to become a reliable partner of local communities. Our constructive cooperation is the key to the current successful operation of the company.

In implementing its programs in the region, the company abides by the Strategy of Sustainable Development of the Issyk-Kul Region, which includes the following four components:

We see it as very important that by the end of operation in 2026 every project or initiative now supported by Kumtor can become independent, viable and beneficial to local budgets and communities.

ONE VILLAGE ONE PRODUCT PROJECT (OVOP)

The project aims to combine the efforts of private entrepreneurs and local communities to develop the economic potential of the Issyk-Kul region by producing goods using existing local resources. 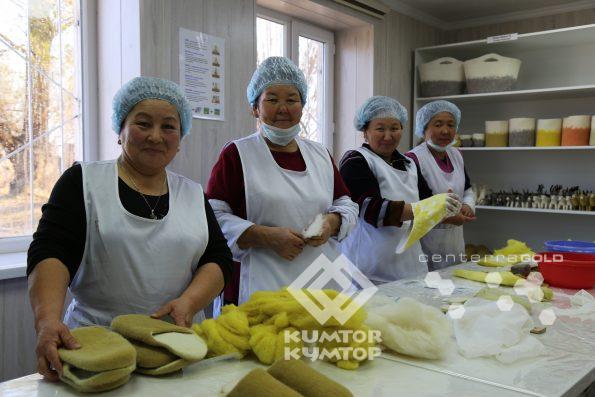 KGC re-launched (started co-funding again) the project in 2016. Small business model through OVOP approach in Issyk-Kul oblast has already been established in the frame of JICA OVOP project.
Target group and area: Community Based Organizations (CBO) focused on felt production in Djety-Oguz and Ton regions. The project has potential to become self-sustainable and successful in contributing towards SME development in the region. Currently, there are 8 production facilities running as part of the community development projects launched by Kumtor Gold Company. The above facilities have earned more than US $46,000 in profit from March to July 2020. 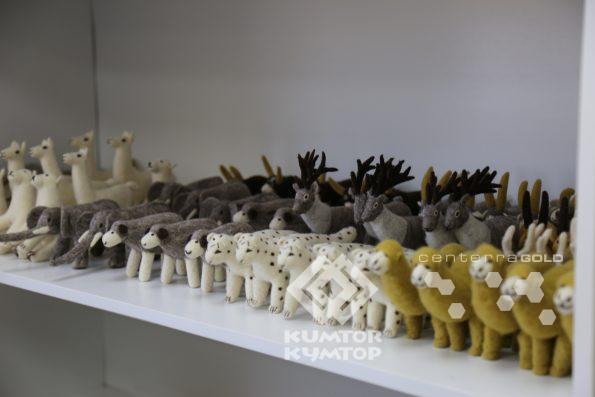 The project focuses on supporting agricultural development. The government is also emphasizing expanding arable land. According to expert estimates, the total area of arable land in the country could potentially be doubled with sufficient investment. 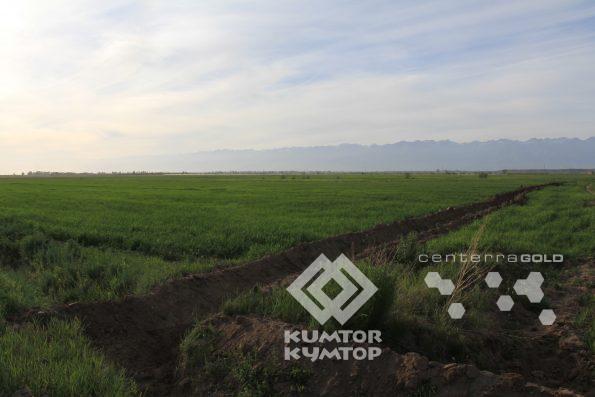 The main goals of our investments are:
(1) To increase irrigation water volume and to significantly expand areas under irrigation
(2) To increase yield and thereby increase farmer’s income.
The areas for rehabilitation were identified at the Regional Committee meetings. The project benefits a large number of people/farmers who have a permanent problem of lack of irrigation water.

The issue of the dam construction in Zelenyi Gai of Jeti-Oguz district, Issyk-Kul region, was first raised at a meeting of the Regional Committee in 2018. This hydraulic structure will continuously supply irrigation water to more than 250 hectares of land where local farmers grow wheat, barley and potatoes. In total, 1,035 households with a population of 4,599 people will get access to irrigation water thanks to the dam. 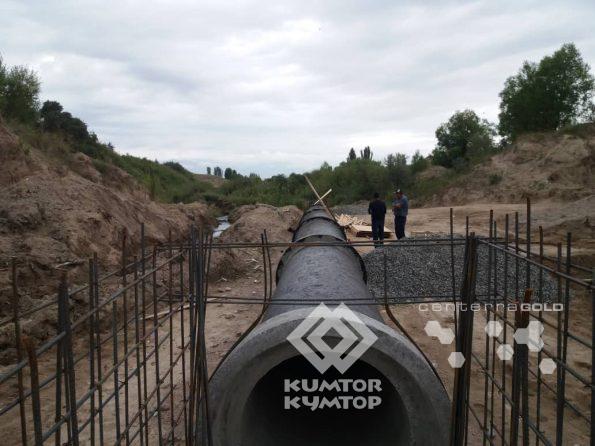 In 2020, KGC and the Regional Committee supported initiatives of Ton District State Administration on the reconstruction of Ak-Bulun irrigation canal. This irrigation canal is of great importance for the residents of Kara-Talaa, Ton district, Issyk-Kul region. However, now most of the concrete plates the canal consists of are worn-out and obsolete. Due to large water losses, local farmers had to reduce irrigation on almost 30 percent of irrigated sites. 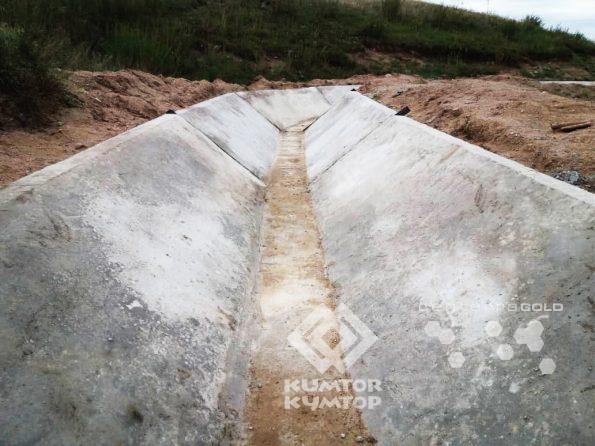 Upon completion of repairs and replacement of canal concrete walls, the canal will be able to serve more than 260 hectares of agricultural land with irrigation water.

At the moment, a more than KGS 3.1 million contract has been signed with the contractor for the acquisition, delivery and installation of concrete plates. Preparations for dismantling of old structures are currently in progress.

In 2020, KGC and the Regional Committee have supported one more initiative of Ton district administration on the construction of Kakyr irrigation canal. The new irrigation facility will be built near Kok-Moinok 2 of Ton district, Issyk-Kul region. It is significant that this rural district, as compared to other aiyl aimaks, almost has no irrigated land. Implementation of this project will help serve more than 100 hectares of land with irrigation water. It is planned that the land will then be transferred to local residents for agricultural use. Each family will be provided with a land lot. The estimated cost of this project is over KGS 4.9 million.

At the moment, the project has been completed by 40%. The irrigation canal is expected to be put into operation by the end of 2020.

The project is designed to provide local communities with access to potable water. The project is very popular since it improves lives of thousands of people. Requests coming to the company for potable water projects are discussed at Regional Committee meetings. 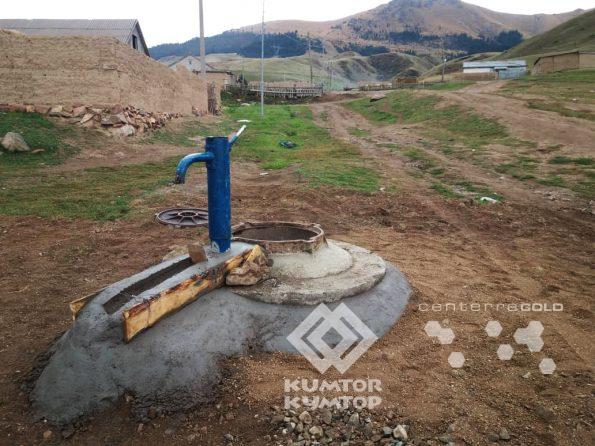 As part of the project, a water intake facility will be built and a major overhaul of the water supply system will be carried out. The project is implemented together with the non-governmental foundation “Fair and Sustainable Development Solutions (FSDS). The contribution of KGC has exceeded KGS 4.4 million. Implementation of this project will help serve more than 650 households with safe drinking water. 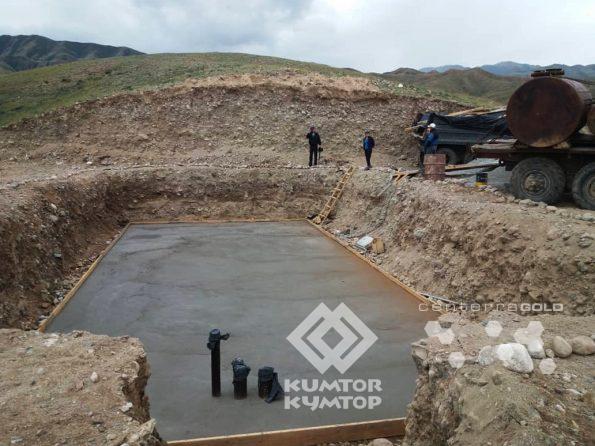 Overhaul of the water supply system in Tort-Kul of Ton district, Issyk-Kul region

KGC allocated over KGS 4 million for the acquisition of repair materials. More than 4,800 residents live in the village, but the water is available for only 10 hours a day. Owing to the project, the local population will be able to use water 24/7. 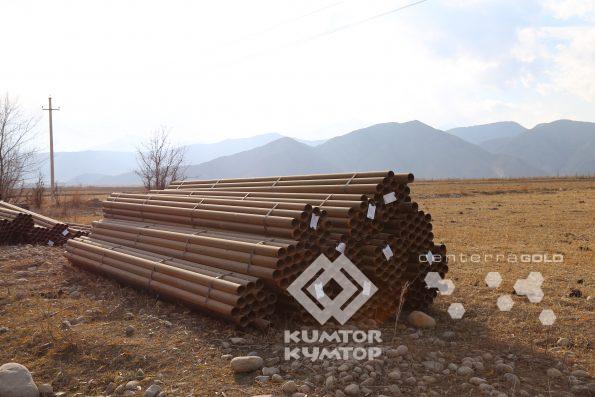 Overhaul of the water supply system in Kadji-Saz of Ton district, Issyk-Kul region

More than 160 people live in this village. Owing to the project, all of them will get access to the safe drinking water. The project is being implemented together with the non-governmental foundation “Fair and Sustainable Development Solutions” (FSDS). The project budget is KGS 2,570,327.

Financing initiatives that address enhancing growth and diversity of SMEs. Local Business Initiatives (LBI) program will support local entities to enhance their capacity to be able to create new jobs and initiate provision of services that are lacking or insufficient in quality or quantity. 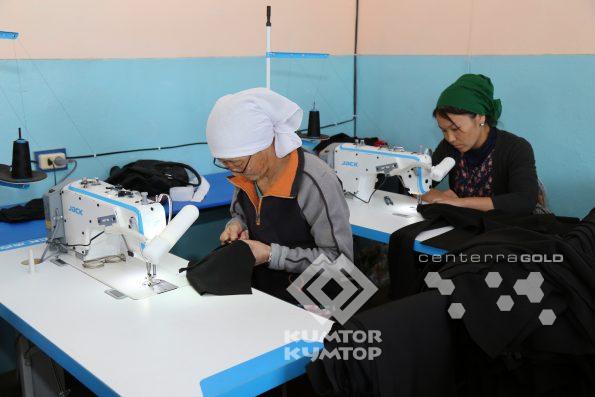 The project is unique not only for Issyk-Kul region, but also for the entire Kyrgyzstan. Organizing and starting waste sorting at the Balykchy municipal landfill site and its subsequent disposal will help significantly improve sanitary conditions and environmental safety of the region. The project is implemented by the municipal enterprise “City Development and Sanitation” under the Balykchy City Hall. KGC contributed more than KGS 4.9 million to the procurement of a waste sorting equipment manufactured in Russia. The municipal enterprise has prepared platforms for the installation of the equipment, built power lines and a hangar. Also, bins for plastic waste have been placed in public places around the city. 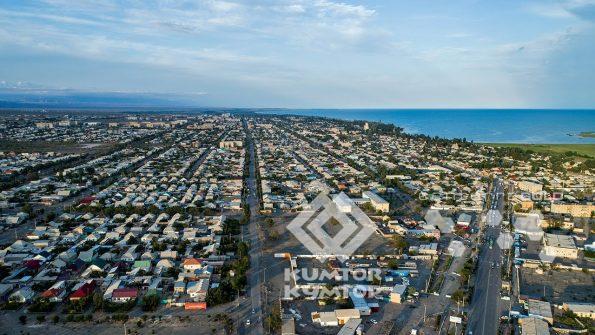 Reconstruction of a rehabilitation center for children with disabilities in Eshperovo

In 2019, KGC contributed more than KGS 900,000 to the reconstruction of a rehabilitation center for children with disabilities in Eshperovo of Ton district, Issyk-Kul region. Building and finishing works have been completed inside and outside the center, all necessary equipment has been acquired. The center is focused on working with children with psychomotor disorders, Down syndrome, cerebral palsy, autism, etc., as well as with the parents of such children. The purpose of the center is to ensure socialization and integration of children with disabilities and development of their daily living skills.

The goal of the project is to provide access to local farmers and shepherds to distant pastures in order to prevent degradation of pastures in close area. Distant pastures are no longer used, the bridges fell into disrepair and this led to heavy overconcentration of cattle around elevation settlements. 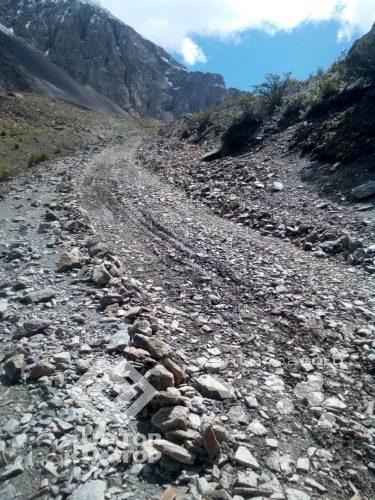 In 2020, KGC supported the road rehabilitation project which included 2 roads leading to the remote pastures over the Barskoon river and through Juuku pass. In the latter case, clearing up 12 km of road leading to the high mountain pastures through the Juuku pass will help cut short by 2 days. The total budget of these projects amounted to KGS 2,821,314.

KGC offers support to local initiatives submitted to the company and discussed at Regional Committee meetings. Projects are usually implemented in partnership with local authorities, local NGOs and youth groups. 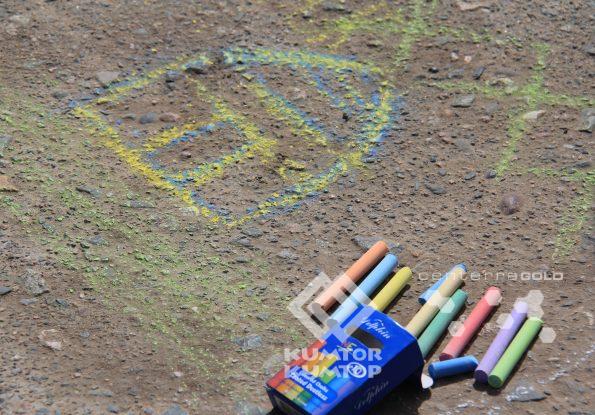 Renovation works under the project included thermal insulation of the building, replacement of the floor, old windows and doors, as well as exterior and interior finishing work. Ak-Shyirak of Jeti-Oguz district, Issyk-Kul region, is located high in the mountains – almost 3,600 meters above sea level. 342 people live in the village. 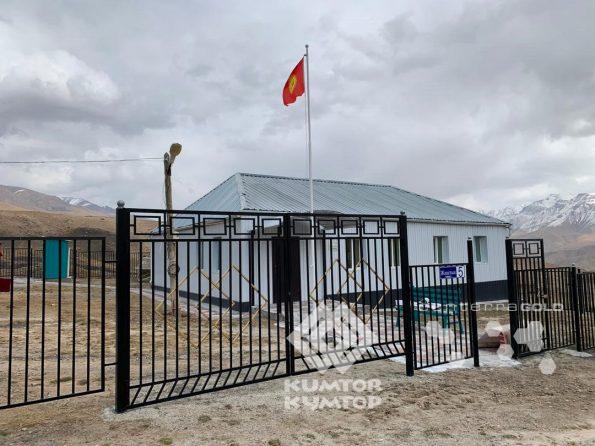 Earlier, in order to get some papers and make use of other public services, they had to go to the neighboring village, Kyzyl-Suu. After the renovation of the building, 5 employees will be working here, and residents of Ak-Shyirak will be granted an opportunity to solve all the issues related to the public services locally.

This project was initiated by the Ton District State Administration and supported by the Regional Committee. At the moment, the project is underway. The project is aimed at improving and providing local services to tourists, which will allow to create a safety area for visitors and jobs for the locals. The project involves construction of a recreation area and relevant infrastructure, parking lots for vehicles, installation of light fixtures, landscaping of the site. Kumtor Gold Company co-funded this project, having contributed KGS 1.45 million to it.

About 20 thousand tourists are expected to be able to make use of those services in the summertime.

The project is aimed at preserving the geological, natural and cultural heritage of the region, creating conditions for the development of sustainable tourism and raising awareness of the local population about UNESCO programs and conventions concerning the protection of the natural heritage. 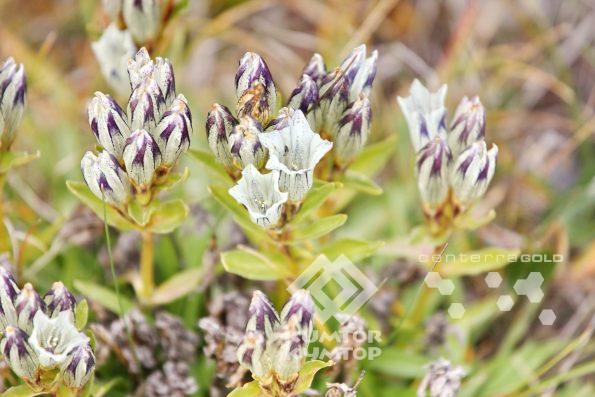 The project was initiated by the local place of destination “Teskei Jeek”, which includes tourist camps and local communities of Issyk-Kul region, involved in the popularization of nomadic traditions. Activists, representing the southern coast of the Issyk-Kul lake, are aspiring to join the UNESCO Global Geoparks Network. For this, in particular, a dedicated website must be created, as UNESCO rules go. KGC contributed KGS 617,000 for the website development, analysis and collection of information about cultural and historical sites and natural monuments. At present, there are 161 UNESCO Global Geoparks in 44 countries.

Creation of two community-based micro-reserves, Ak-Bulun and Aidyn-Kol, in Ton district of Issyk-Kul region, is a project intended to protect and conserve biodiversity of the southern coast’s marshy areas. 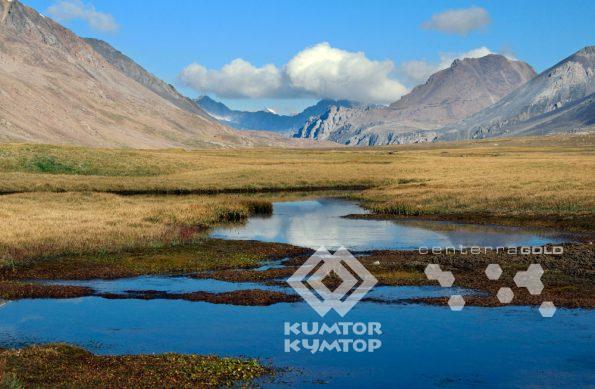 The project is being implemented jointly with UNDP. Kumtor Gold Company’s contribution was about KGS 1.3 million to be spent on the development of dedicated websites of nature reserves, development of the “Statute of Community-Based Micro-Reserves,” arrangement of a hunting cordon, construction of a pond for growing and keeping the fish breeding stock, stocking the Aidyn-Kol lake with fish, production and installation of road signs, as well as the popularization of environmental topics.

As part of the cooperation program for the Issyk-Kul region, Kumtor has supported a seed farming project in Jety-Oguz district, Issyk-Kul province developed by the Regional Development Agency Public Fund. Its budget is 5 million soms.

Kumtor Gold Company CJSC supported the implementation of the project “Popularization of Energy Efficient Construction in the Region”. The project is implemented by the Public Association “Seico”. The project budget is US $ 130,000.

Kumtor Gold Company provided support to the project “Job creation through opening and development of mini sustainable sewing shops in the region” being implemented by “Insan Generation” Public Foundation. The project budget is USD 118,000.

27.07.2020 Kumtor Gold Company Supports Project on IT Development and Digital Literacy Promotion Among the Issyk-Kul Youth

Kumtor Gold Company supported the project “Training of Software Developers (Front-End + PHP)” to be implemented by IT Academy Karakol (Non-Governmental Association “Steps to Success”) in 2020-2021 academic year. The project budget is USD 61,060.

Kumtor Gold Company funded the children’s playground and youth recreation project to be implemented in Orgochor, Jeti-Oguz district. The facility will also be available for children from the adjacent villages. The project was implemented under the KGC program providing financial assistance to local initiatives.

Kumtor Gold Company CJSC, as part of the regional cooperation program and Issyk-Kul farmers assistance scheme, having considered the project proposed by the villagers, has contributed KGS 3,875,740 for rehabilitation of the pumping station and water intake channel in Eshperov, Ton district, Issyk-Kul region.