On April 6, 2018, a table tennis friendly tournament was held in Bishkek with the support of the Ambassadors of Kumtor. Participating in the tournament dedicated to World Table Tennis Day were a team of national boarding school for hard-of-hearing and late-onset deaf children No. 21 and a team of the special boarding school for deaf children. The event was organized by the New Opportunities Public Fund with the support of the Table Tennis Association of the Kyrgyz Republic. 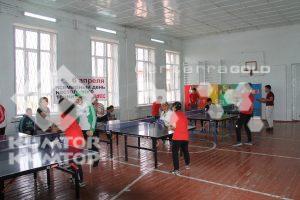 The Tournament’s purpose is to promote this sport in the Kyrgyz Republic, enhance the role played by physical culture and sport in the all-round and harmonious development of an individual, and strengthen friendly ties between the children of these two children’s institutions. 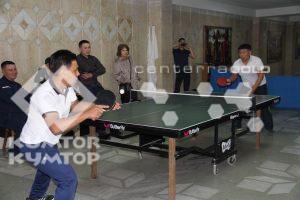 World Table Tennis Day is a very recent tradition first marked on April 6, 2015. Yet, this didn’t prevent it from becoming instantly popular around the globe. It was initiated by the International Table Tennis Federation, ITTF, in order to promote this sport in various countries, bring table tennis aficionados together and, certainly, promote healthy life styles.
On the same day, World Table Tennis Day, Apr. 6, a friendly table tennis tournament was held on the second floor of the Uchkun Company administrative office involving employees of Kumtor Gold Company and Uchkun Company. The first and second places were awarded to KGC employees Almaz Kachiev and Guljigit Mamytov, and the third place was awarded to Bektur Osmonbekov, an employee of Uchkun Company. The funds raised during the tournament were used to purchase prizes for the table tennis teams of national boarding school for hard-of-hearing and late-onset deaf children No. 21 and special boarding school for deaf children. Moreover, it was suggested that similar friendly tournaments should be held a few times a year to improve sportsmanship and foster sporting spirit. 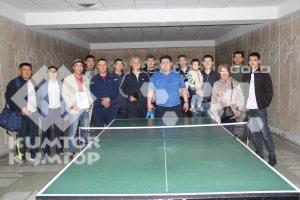