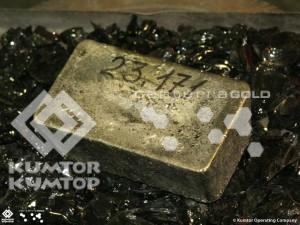 “A private Russian bank, NOMOS, purchases 98% of gold produced in Kyrgyzstan. This bank has been Kyrgyzaltyn’s major purchaser of gold and silver since 2006 with the Russian bank’s trade turnover growing each year,” said K. Berdibayev.

According to K. Berdibayev, the 2011 gold production was 509.1 kg at Kyrgyzaltyn’s mines and 19,677.4 kg at Kumtor.
Meanwhile, information posted for potential clients on the website of NOMOS Bank says that the Bank offers a wide range of gold and silver bars produced by Russian refineries without saying a word about gold purchased from Kyrgyzstan.

It will be recalled that the group of NOMOS Bank ranks eighth among the largest banking groups in terms of assets and second among Russia’s largest private-owned universal banks: the consolidated assets of the group are Rubles 644.2 billion and equity capital is Rubles 70.1 billion as of September 30, 2011.