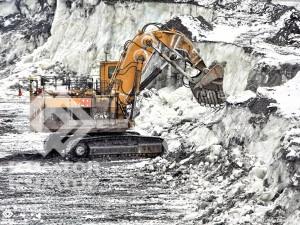 Total tonnes mined for the second quarter of 2012 were 42.7 million tonnes compared to 38.3 million tonnes in the comparative quarter of 2011, an increase of 12% due to the increased capacity of the expanded mining fleet. During the quarter, the company mined waste from cut-back 14B and continued to unload the ice and waste material from the high movement area. The revised mining plan in the southwest section of the open pit and the progress with the ice and waste unload is expected to provide access to ore by the end of the third quarter of 2012. During the second quarter of 2012, no ore was mined and all the mill feed processed came from stockpiles.

For other operational results see Table # 2.

Total production costs, including amortization and depreciation, in the second quarter of 2012 were $40.7 million.

Capital expenditures spent and accrued at Kumtor for the second quarter of 2012 were $110.0 million which includes $11.2 million of sustaining capital predominantly expended for:
– the dewatering program ($4.3 million);
– the major overhaul program for heavy duty equipment ($3.9 million);
– the tailings dam expansion ($2.9 million);
– other projects ($0.1 million).

Exploration expenditures totaled $2.9 million for the second quarter of 2012. Exploration activity focused on drilling of the SB Zone from the Central Pit, underground exploration drilling from Decline#1 and #2, and drilling at Sarytor.

A complete listing of the drill results and supporting maps for the Kumtor pit and Northeast area have been filed on the System for Electronic Document Analysis and Retrieval (‘SEDAR’) at: www.sedar.com and are available at the Company’s web site at: www.centerragold.com.

During the first six months of 2012, contributions to the national budget in taxes, deductions to the Social Fund and other mandatory payments have totaled more than $77.9 million. According to the official National Bank exchange rate as of June 30, 2012, this is more than 3,679 million soms (compared to 3,650 million soms in the first six months of 2011). (See Table #1).

At the request of the Kyrgyz Government, on May 28, 2012, the Company advanced $30 million in revenue-based taxes. This interest-free advance will be applied against revenue-based taxes otherwise payable during 2012 (starting in November 2012) and 2013, under a formal repayment schedule that will involve $10 million being off-set in 2012 and the remaining $20 million off-set in 2013.

On April 23, 2012, the Company signed an agreement with the Kyrgyz Government to fund $21 million into a national micro-credit financing agency, Ala-Too Finance, which was created under the National Program for Employment and Alleviation of Poverty. $21 million was transferred to the said agency part of an existing government program whose objective is to provide financing for sustainable development projects throughout the Kyrgyz Republic.

The dividend is an eligible dividend for Canadian income tax purposes.

In accordance with Centerra’s dividend policy, the timing and quantum of dividends are to be determined by the Board of Directors from time to time based on, among other things, the Company’s operating results, cash flow and financial conditions.

In addition to the National Commission, two interagency commissions were formed on July 13, 2012, whose objective was to review Kumtor Operating Company’s compliance with legal and environmental rules effective in Kyrgyzstan.

On July 5, 2012, the Kyrgyz Government issued Decree #475 cancelling Government Decree #168 dated March 25, 2010, which provided Kumtor with land use (surface) rights over the Kumtor concession area for the duration of the Restated Concession Agreement. On July 6, 2012, in response to a request for clarification from the Company, the Kyrgyz Republic Prime Minister confirmed the Government’s position that Decree #475 would have no impact on or limit in any way Kumtor’s activities or operations.

On July 17, 2012, the Company received notice from the Kyrgyz Republic Social Fund declaring invalid an August 23, 1994 agreement between the Kyrgyz Social Fund and Kumtor Operating Company, and requiring Kumtor to pay Social Fund contributions for all expatriate employees for the period from February 15, 1993 to present.

The Company notes that pursuant to the Investment Agreement, Kumtor is only required to make Social Fund payments in respect of such Kumtor employees who are Kyrgyz citizens.

Kumtor received notice on June 15, 2012, that the renewal applications for its exploration licenses for the Koendy license area and the Karasay license area would be reviewed by the Kyrgyz Republic Environmental and Forestry Agencies for possible impacts on the nearby Sarychat-Ertash State Reserve. Kumtor has been conducting exploration on these two license areas since 2010 and has expended in excess of $1 million. It is unlikely that any exploration work will be performed on these licenses in 2012.

Temporary suspension of further development work on the underground project

As previously disclosed, development work on the Kumtor underground project at the Kumtor Mine was temporarily suspended effective August 10, 2012. The temporary suspension is a result of the ongoing technical and financial study of the potential for expanding the limits of the open pit at Kumtor. Work-to-date has produced encouraging results and indicates that a much larger open pit is feasible, which would result in an addition to the open pit reserves and a substantially extended mine life. The expanded open pit would also encompass a significant part of the existing SB underground development and would result in a revaluation of the associated capital investment, therefore, further development work on the underground project has been postponed until the study is finalized.

The Company expects to complete the study and release its findings by the end of the third quarter of 2012. Underground exploration drilling will continue from the underground declines to further delineate and expand the SB Zone at depth and along strike.

The Kumtor mine is expected to produce 390,000 to 410,000 ounces or 12.1 to12.75 tonnes of gold in 2012. Production at Kumtor is dependent on successfully maintaining the mining rates of the waste and ice in the south section of the pit to gain access to the higher grade ore in the SB Zone.

A substantial acceleration of ice and waste movement in the first quarter, which was exacerbated by the labour disruption which occurred in early February 2012, required that operations in the southeast section be delayed. This is expected to delay the ore release from the cut-back to late 2013.

The Company is planning to focus on removal of ice and waste in the high movement area by allocating more of the existing mining capacity to unload activities.

The Company expects to partially mitigate the impact of the ice and waste movement and the resulting problems by accelerating mining in the southwest portion of the Kumtor pit to access part of the new reserves in September 2012 to provide ore for the Kumtor mill. The Kumtor mill processed stockpiled ore until July 22, 2012, at which time surface ore stockpiles were exhausted, and after which the mill was temporarily shut down. The planned downtime of the mill during August (reported in the Company’s May 15, 2012, update) will be used to carry out scheduled mill maintenance.

2012 total capital expenditures for Kumtor are forecast to be $370 million including:

Exploration costs in 2012 are expected to total $13 million.

Michael Fischer, President of Kumtor Operating Company, stated, “At present, we are continuing the prestripping  to gain access to the southwest section of the pit and we are on schedule to access the ore in mid-September to provide ore for the Kumtor mill, when we will see a return to normal production in the fourth quarter of 2012.  We are continuing our mitigation plan to deal with problems arising from the ice and waste movement to allow access to the southeast side of the pit.”

The Kumtor open pit mine, located in the Kyrgyz Republic, is the largest gold mine in Central Asia operated by a Western-based producer. It has been operating since May 1997 and, as of June 30, 2012, has produced approximately 8.5 million ounces or about 264 tonnes of gold.