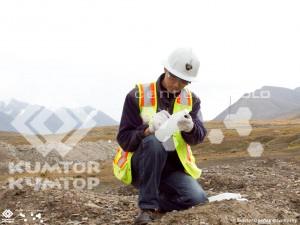 In response to statements from various experts, officials and the general public recently in respect to the environmental situation at the Kumtor mine, pointing to alleged detrimental effects of the company’s production activities on the environment, Kumtor Company presents to the broad public the full texts of reports and the basic conclusions made by the laboratories of Germany and Slovenia. These reports were carried out at the request of the State Commission as part of its technical assessment of the Kumtor mine. Sampling and analyses performed at the Kumtor mine was done according to current guidelines and standard procedures established in the European Union and in Germany.

In particular, the German experts note in their report:

“The element concentrations and the cyanide and fluoride concentrations of the water samples collected largely correspond to the natural geochemical background levels. The analytical data do not provide evidence of the presence of undue high concentrations of cyanide and toxic elements in surface water at the sampling locations of this study.
The increased levels of sulfate, nitrate and ammonia in the water of the Kumtor River about 5 km downwards of the Kumtor Gold Mine appear to require a closer examination with regard to possible adverse effects on sensitive aquatic organisms. It should be noted, however, that other sources may cause or contribute to the increased levels of sulfate, nitrate and ammonia in this section of the river.

The water quality of the Kumtor River, the Arabel River and the Barskoon River is largely in accordance with the limit values of the European Council Directive 98/83/EC, of 3 November 1998 on the quality of water intended for human consumption and with the Environmental Quality Standards of the Directive 2008/105/EC of the European Parliament and of the Council of 16 December 2008 on environmental quality standards in the field of water policy. Solely the water of the Kumtor River exceeds the limit values for ammonia, iron and sulfate, and the water of Arabel River exceeds the limit value for iron. Apart from these parameters and possibly microbiological parameters (which were not determined in this study) the water of these rivers may be used as water to produce water for human consumption and as water for feeding animals without concern. The elevated levels of ammonia, sulfate and iron do not represent a hazard for humans.

The concentration of elements and cyanide measured in the waste water from the waste water treatment plant are significantly below the limit values of the German Ordinance on Waste Water.

The laboratory of the Jožef Stefon Institute in its report states:

“It should be noted that the concentrations levels of the analyzed elements in the environment were within the limits typical for such industrial operations [Milačič et al., 2010] and were below the values, which indicate an environmental pollution or contamination situation.”

Reports of both laboratories were received by the Company from the State Commission in response to an official request.

The full texts of the above laboratories’ reports are available here: