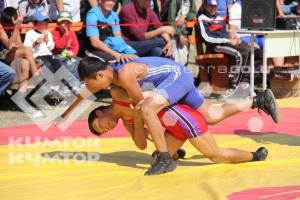 A National Graeco-Roman Wrestling Championship was held on September 29-30, 2013, in the village of Saruu Jety-Oguz district.

This was a fourth tournament held at Saruu to commemorate Rustan Shambetov who died on April 7, 2010, on Ala-Too Square in Bishkek. Kumtor Company has traditionally supported the sports initiative and contributed to this year’s competition.

Attending the opening ceremony were Emilbek Kaptagayev, Envoy Plenipotentiary of the Government in Issyk-Kul province, Bekkubat Imankojoyev, Acting Head of the Jety-Oguz District Administration, representatives of the gold mining Company and district residents.

The number of contestants and the scope of the event growing every year, hundreds of sportsmen from Kyrgyzstan’s various regions took part in the 2013 championship. In addition to the Graeco-Roman wrestling competition, this year’s program included also kok-boru and indoor soccer matches involving teams of the nearby communities.