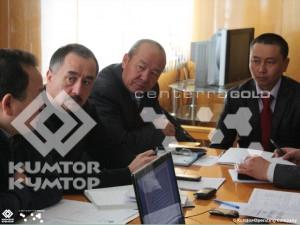 The Regional Cooperation Committee held a meeting at Bokonbayevo, Ton district, on March 14, 2012, to review its activities in 2011 and discuss plans for 2012.

The microcredit agency Ton-Finance reported its 2011 financial activities. According to the report, loans were granted to 42 projects which created 75 new jobs in 2011. Ton-Finance’s credit portfolio in 2011 was Soms 14 million.

A further 92 loans were granted by the local department of Ayil Bank out of the 7-million credit line opened by KOC in 2010 for the Ton community.

According to the district akim, Bakyt Ryspayev, general meetings were called in 30 villages where he had informed community members about assistance being provided by Kumtor in the development of their district.

The meeting also discussed preparations for the spring sowing campaign.