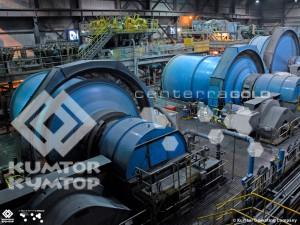 The gold mill resumed operation at the Kumtor Mine site September 18, 2012. Ore processing was suspended on the 23rd July 2012 following depletion of the low-grade surface stockpile material, as outlined in the March 2012 revised mine plan. The period during which the mill was not in operation was used to carry out planned and unplanned mill maintenance across all sections of the mill.

The Company is now mining ore from the southwest portion of the open pit as per the schedule of the March 2012 revised mine plan, and expects to produce between 260,000 and 270,000 ounces or 8.1 to 8.4 tonnes of gold in the fourth quarter of 2012. Achieving the projected gold production is dependent upon no unplanned delays in or interruption of the scheduled production, including labor disruptions, civil unrest, natural phenomena, regulatory or political disputes, governmental actions, equipment breakdown or other development and operational risks.

Previous publicationTwo classrooms, renovated and equipped with the support of Kumtor Operating Company, opened at vocational school No. 27 Next publicationKyrgyz prime minister rules out nationalising Centerra gold mine