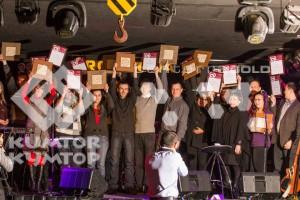 Last Saturday, December 15, 2012, the Premia.kg National Internet Prize was officially given to winners in Bishkek.

The competition involved 215 domestic websites which won a total of 25,000 votes in nine categories: “Media and Society”, “Communications”, “State and NGOs”, “Medicine and Health”, “Business and Commerce”, “Blog Sites”, “Entertainment”, “Young People and Education”, and “Sport and Tourism”. Three websites were noted by the organizers in each of the categories. The prize winners received certificates and awards shaped as «@». Kumtor was the official partner of the competition and the ceremony.