Employees of Kumtor mine site saved the argali 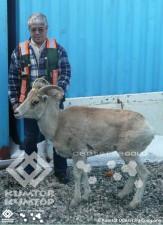 In late May, nearby from the residential camp of Kumtor mine, employees of the Company found a mountain sheep, which was in a serious condition. Young female argali, separated from the herd, nearly became the prey of wolves. Badly bitten, argali needed help of people.

The affected animal for several days was under the close supervision of medical department. Employees literally saved the argali, which proved to be very kind and friendly.

Given that the argali still needs care and attention of professionals, it was decided to transfer the animal to the zoo of the city of Karakol.

On June 4, 2012, after the condition of the red book animal was defined as satisfactory, employees took the animal into the Karakol city zoo. Now the argali will be under the protection and care of professionals of Wildlife Center. Argali can endure captivity and are able to live in zoos.