Operating Results of the 1st quarter of 2012 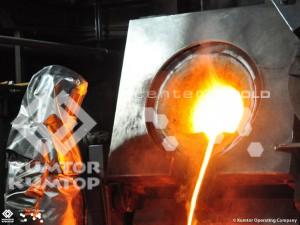 Centerra Gold Inc. (Centerra) and Kumtor Operating Company have summed up the operating results of the 1st quarter of 2012. During the first three months of 2012 Kumtor produced 60,707 ounces* or 1,888 kg of gold. Since the beginning of 2012, the Company has contributed more than Soms 1.37 billion in taxes and mandatory payments.

– changed sequencing of ore in 2012 which originally differed from stable ore mining in 2011. In 2012, the gold production is expected to be weighted to the fourth quarter;
– lower ore mill head grades and recoveries, as the mill processed stockpiled material with lower grades.

Mill head grades for the first quarter of 2012 were 1.98 g/t with a recovery of 72.6%, versus 4.12 g/t and a recovery of 82.6% for the same quarter in 2011. The mill processed 1.3 million tonnes in the first quarter of 2012, 10% lower than the same period in 2011 as a result of lower mill operating time due to the temporary suspension of operations resulting from a ten day illegal work stoppage.

Total production costs, including amortization and depreciation, in the first quarter of 2012 were $73 million.

During the quarter, Kumtor recorded $4.6 million of mine standby costs as a result of the work stoppage. Total production cost per ounce produced was $1,202 in the first quarter of 2012 up from the first quarter of 2011 primarily as a result of 63% lower gold production and the increasing depreciation costs from the augmented fleet. What’s more, with very low amounts of ore being mined in the first quarter of 2012, the cost of ice and waste removal added a significant amount of abnormal costs to the existing inventory. The unanticipated acceleration of ice and waste, in addition to the work stoppage in February, resulted in the loss of access in the southeast part of the pit and will require significant effort and cost over the balance of 2012 and 2013.

The underground development at Kumtor continued in the first quarter of 2012 with a total advance of 474 metres. Decline #1 (SB Zone decline) advanced 223 metres while Decline #2 advanced 251 metres in the first quarter towards the SB Zone. The underground development project is on track to achieve the connection of Decline #1 with Decline #2 early in the third quarter of 2012.

Exploration expenditures totaled $2.2 million for the first quarter of 2012 due to increased drilling activity in the first.

During the first quarter of 2012, exploration drilling programs continued in the Kumtor Central Pit and the Northeast and Southwest deposits as well as on the Kumtor concession area.

A complete listing of the drill results and supporting maps for the Kumtor pit and Northeast area have been filed on the System for Electronic Document Analysis and Retrieval (‘SEDAR’) at www.sedar.com and are available at the Company’s web site at: www.centerragold.com.

During the first three months of 2012, contributions to the national budget in taxes, deductions to the Social Fund and other mandatory payments have totaled more than Soms 1.37 billion.

The planned gold production sequence at Kumtor in 2012 is expected to be as follows:

In 2012, the Company is going to accelerate mining in the southwest portion of the Kumtor pit to access part of the new reserves (see Centerra’s February 9, 2012 reserve and resource update) in September 2012 to provide higher grade ore for the Kumtor mill. Production at Kumtor in the next two years is dependent on successfully maintaining the mining rates of the waste and ice in the southeast section of the pit. Strict adherence to the revised mine plan is expected to lead to a gradual increase in gold production within the next three years from approximately 400,000 ounces in 2012 to 650,000 ounces in 2013 and approximately 810,000 ounces in 2014.

2012 total capital expenditures at Kumtor are forecast to be $370 million including:

– $32 million of sustaining capital (the major overhaul maintenance of the heavy duty mine equipment, expenditures for dewatering and infrastructure, effluent treatment plant relocation, tailings dam construction works and for equipment replacement and other items);

Planned exploration expenditures in 2012 are expected to be $15 million.

The Board of Directors has authorized a dividend of Cdn$0.04 per common share. The dividend is payable on June 15, 2012 to shareholders of record on May 31, 2012. The dividend is an eligible dividend for Canadian income tax purposes.

Funding of the microcredit financing program in the Kyrgyz Republic

On April 23, 2012, KGC signed an agreement with the Kyrgyz Government to fund $21 million to microcredit financing program. This funding is part of an existing government program whose objective is to provide financing for small sustainable development projects throughout the Kyrgyz Republic. On signing of this agreement, the $21 million was transferred by KGC to the  microcredit agency, chosen by the Government. This funding is in support of the Company’s commitment to invest in sustainable development projects in the communities where it works.

On May 17, 2012 after the annual meeting of shareholders Mr. Stephen Lang stepped down as Centerra’s President to replace Mr. Patrick James as the Chair of the Board. Mr. Ian Atkinson became Centerra’s new President and CEO. Mr. David Groves was promoted to the position of Vice President, Global Exploration.

Michael Fischer, President of Kumtor Operating Company, commented, “Reduction of gold production in 2012 was due to the accelerated ice movement above the SB Zone at Kumtor. In this situation, a decision was taken to offload this high movement area. The Company is planning to focus on removal of ice in the high movement area by allocating more of the existing mining capacity to ice and waste unload activities. This work will require significant effort and cost over the balance of 2012 and 2013 to gain access to the higher grade ore in the SB Zone. Thus, we are hopeful that the amount of gold that we cannot produce according to this year’s prior guidance will be produced by the end of 2014, even though we will have to remove approximately 50 million tonnes of ice and waste.”

For the First Three Months of 2012

The Kumtor open pit mine, located in the Kyrgyz Republic, is the largest gold mine in Central Asia operated by a Western-based producer. It has been operating since May 1997 and, as of March 31, 2012, has produced approximately 8.4 million ounces or about 262.6 tonnes of gold.
Kumtor Operating Company is the operator of the Kumtor project responsible for the entire production cycle.

Additional information on Centerra and the full text of the news release on the results of the first quarter of 2012 are available on SEDAR at www.sedar.com and the Company’s website at www.centerragold.com. Information about Kumtor Operating Company is available at www.kumtor.kg

**– Unless specified otherwise, all dollar figures in this news release are in US dollars.