Two felt production facilities opened in Tamga and Tilekmat villages of Jeti-Oguz District on February 27, 2019. Production facilities were launched as part of the local community empowerment project, implemented jointly with the ‘One Village One Product’ Association (OVOP) and funded by Kumtor Gold Company (KGC). 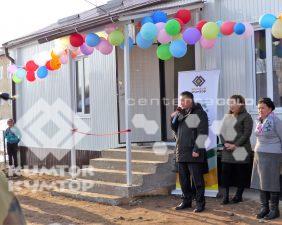 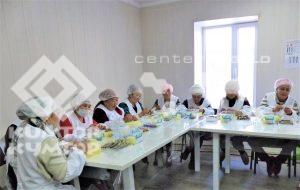 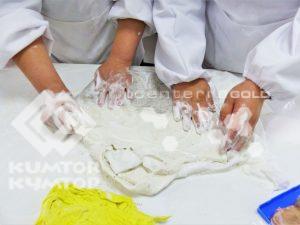 “Today we are opening two production facilities in Tamga and Tilekmat villages as part of our cooperation with Kumtor. Before that, we have already opened 4 other production facilities. Thus, at present, a total of 6 facilities employing members of our Association are operating in the region. Working in clean rooms with all the modern amenities, outfitted with all necessary equipment and production tools, makes our production activities much easier and helps us produce high-quality items. The opening of these production facilities helped to create jobs in the villages, increase production volumes, improve the quality of products and at the same time contributed to the socialization of women in rural localities. We are expressing our great appreciation to Kumtor Gold Company for financial support and to the Japan International Cooperation Agency (JICA) for technical support of the ‘One Village One Product’ approach implementation, for empowering local communities and supporting the manufacture of high quality products from local resources,” noted Elnura Sadybakasheva, Chair of OVOP Association. 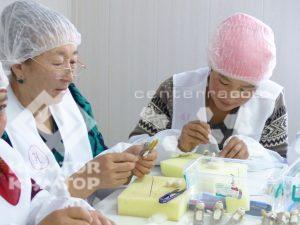 “It is important for us to promote the local employment: these production facilities will provide jobs for about fifty women from two villages. Felt toys and souvenirs will be available to buyers both in the local and foreign markets,” said Meerim Matkulova, Senior Coordinator, KGC Sustainable Development.

Goods produced by local manufacturers – members of ‘One Village One Product’ Association are available in ‘Issyk-Kul Brand’ shops in Karakol and Bishkek, at Gazprom gas stations, in guest houses, hotels and coffee shops throughout Kyrgyzstan. The total number of sales outlets is about 40. In addition, felt items produced by the Association are exported to Japan, the USA and Europe. On an average, each member of the local community earns KGS 10,000–18,000 per month depending on the volume of production.

Cooperation of KGC with the Association began in 2013. As part of the KGC-OVOP joint project, production facilities were opened in Shor-Bulak and Ak-Sai villages of Ton District. This year, another production facility has been opened in Kara-Koo village of Ton District. Trainings on improving production skills of local manufacturers, principles of marketing, financial accounting and principles of working capital management were also held within this joint project. The project covered about 800 people from 20 villages and 78 local communities of two districts.

For information: The ‘One Village One Product’ Association (OVOP) was established in 2011 by local manufacturers of Issyk-Kul Oblast as part of JICA project “Local Community Empowerment Through Small Business Promotion by Introducing ‘One Village One Product’ Approach.” All products of the Association are promoted under the ‘Issyk-Kul Brand’ trademark. The Association is a success model of small business promotion at the level of the small group that manufactures products using local resources. At present, the Association consists of more than 2,500 members (300 local communities), and the majority of them are women.