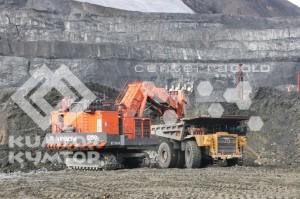 The 2013 production guidance was achieved due to mining carried out in the high-grade SB Zone of the Central Pit.

According to preliminary estimates, the Kumtor mine will produce between 550,000 and 600,000 ounces or 17.1 to 18.7 tonnes of gold in 2014 and, similar to 2013, over 50% of this gold production is expected during the fourth quarter when mining will reach the high-grade section of the SB Zone.

The projected capital expenditures for 2014, excluding capitalized stripping, are estimated to be $85 million** of which $42 million will be spending on sustaining capital***, including the major overhaul maintenance of the mine equipment, purchase of ball mill girth gear, tailings dam construction raise and other items. Growth capital*** investment at Kumtor is forecast at $43 million and includes the relocation of certain infrastructure at Kumtor related to the KS-13 life-of-mine expansion plan, dewatering projects and purchase of new mining equipment.

Capitalized stripping costs (cash) are expected to be $191 million in 2014.

All-in costs including all capital expenditures and taxes per ounce sold are forecast between $1,008 and $1,100***.