Kumtor Gold Company CJSC (KGC) announces the move to a new generation office located in the very center of Bishkek at 178 Panfilov Str.

The Company entered into an office lease agreement with a total area of more than 5,000 sq. m. The new office will also accommodate the structures of the National Holding Company “Great Nomads Heritage” (the Holding), which was established in December 2021 and acts as the External Manager of the Kumtor Gold Company CJSC.

The relocation is associated with the decision to consolidate all subdivisions in one place, the expansion of production and economic activities, the creation of additional jobs in connection with the involvement of highly qualified specialists, the policy to create a safe and comfortable environment for staff and visitors, as well as the desire to organize the correct functional and technological connection between departments.

In the previous office in the building of “Uchkun” JSC at 24 Ibraimov Str., the Company has operated for over 25 years. During this time, approaches to the organization of office spaces have changed, along with the requirements for workspace. The premises of “Uchkun” were designed in the 1970s according to the Soviet “cabinet” system, which does not meet international standards, and as the building became obsolete, economic problems accumulated related to heating, power outages, lack of a proper ventilation system, which directly affects workflow efficiencies.

The inconvenient infrastructure of rented premises, where there are only two working elevators, one of which goes out of order from time to time, creates queues for elevators, hence employees with visitors of the Company often have to climb the stairs to the upper floors (from the 10th to the 14th), although at some point, the Company had to replace these elevators at its own expense. The issue of accommodating new employees of KGC and the Holding also became acute. Thus, the topic of relocation arose because the former lessor was unable to provide additional office space and provide services in accordance with the realities of the time and the needs of the Company.

The new office also meets the most stringent modern security standards and can accommodate the necessary KGC staff, as well as the Holding’s projects.

It should be noted that the Company undertook a lot of preliminary work and considered various proposals for new offices in Bishkek, however, all of them did not meet the requirements in many respects (inconvenient location, lack of underground and ground-level parking, insufficient space, non-compliance with security rules, etc.). The choice in favor of this office was also dictated by an adequate average market cost of rent, corresponding to the level of an A-class business center. As a result, the Company chose the option with the lowest price.

The new office will embody the status of the Holding, influence its image, and will allow holding high-level meetings, receiving investors and potential partners. The National Holding Company “Great Nomads Heritage” will develop new deposits across the country and implement large investment projects. Currently, 345 people work in the Bishkek office of KGC. The holding plans to attract 50-70 additional specialists in mining and industrial projects, 30-40 specialists in hydropower projects, as well as more than 40 specialists in infrastructure projects. In total, almost 500 people moved to the new office.

The new Bishkek office is a direct proof of the long-term work of KGC and the Holding for many decades to come. The relocation is part of the Company’s growth process concept, creating a favorable basis for the implementation of strategic plans for the future in order to develop the Kyrgyz Republic, for the benefit of which we work daily.

ON THE PHOTO: The old office of “Uchkun”. 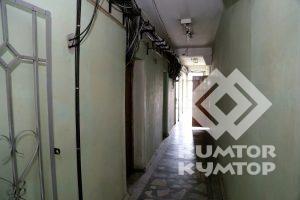 Previous publicationThanks to Kumtor, hundreds of students and teachers of music schools in Kyrgyzstan attended the concert of Daniel Lozakovich Next publicationMore than 100 young specialists were hired for internship at Kumtor in 2022