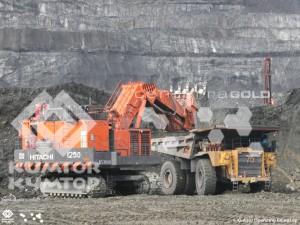 The first open pit mine excavator Hitachi 3600 has been commissioned at the Kumtor Mine. So far, it is the largest excavator employed within the Kyrgyzstan mining sector. It has a bucket capacity of 23 m3. The cost of the excavator, delivery included, is estimated at US $5.9 million. It is the first of the four shovels purchased by the Company in 2012 under its program of modernization and expansion of production.

As previously disclosed, growth capital investment at Kumtor for 2012 is forecast at more than $330 million. The significant part of the investment will be expended for the purchase of new mining equipment.

Remarkably, as admitted by Hitachi itself, Kumtor is the highest mine in the Former Soviet Union employing Hitachi shovels and it will become a kind of litmus test to show whether Hitachi shovels are capable of working in an extreme environment like this. The Company’s investment, great as it is, will surely pay its way: Hitachi 3600 shovels can reduce costs in terms of the weight of the material moved. Its low maintenance cost and extended life time will enable the Company to cut down its expenses. Importantly, the new equipment meets every industrial safety standard adopted all over the world.

Currently, one more Hitachi 3600 shovel is being assembled at Kumtor while two other shovels will be delivered to the mine site, knocked-down, within the next two months, assembled and commissioned by the end of 2012.

“By their capacity, the new Hitachi excavators exceed the Liebherr and Caterpillar shovels available now at Kumtor. They will enable the Company to increase its potential and raise efficiency of moving rock and mining ore in the short run,” said Michael Fischer, President of Kumtor Operating Company.

Previous publicationRepresentatives of youth environmental NGOs and the Swiss program for the development visited Kumtor mine site Next publicationTwo classrooms, renovated and equipped with the support of Kumtor Operating Company, opened at vocational school No. 27