During the period of temporary external management at Kumtor Gold Company CJSC (KGС), in order to stop the destruction of glaciers and mining of gold-bearing ore in a more environmentally friendly and economically profitable way, the Kumtor deposit development strategy was changed with a gradual transition from open pit to underground operations.

Underground mining will allow Kyrgyzstan to significantly reduce environmental damage and abandon unsustainable mining practices. During the management of the Canadian Centerra Gold, the mining operations at Kumtor were carried out by traditional open cast methods. As a result, mining of 1 tonne of gold-bearing ore requires the extraction of waste rock between 41 and 60 tonnes. According to this indicator KGC is on the 1st place in the world among mining companies. The usual global average  stripping ratio ranges from 2 to 7 tonnes of waste rock per 1 tonne of ore. For example, this ratio is 1:2 at Oksut mine in Turkey and 1:1 at Mount Milligan mine in Canada. Both facilities are owned and operated by Centerra Gold. Environmental requirements established in Canada and Turkey prevent mining companies from using destructive mining methods in their territories.

Underground mining is aimed at more selective extraction of gold-bearing ores with a very low stripping ratios: 1:2 or maximum 1:3. According to preliminary data, Kumtor’s underground ores contain more than 5 grams of gold per tonne, which is almost twice as much as in open pit mining. The expected total cost of underground mining will be lower than the current cost, despite the higher operating costs of  underground mining.

It should be noted that KGC had planned the underground project and implemented it from 2008 to 2012, but the project was stopped sooner. Though the project costs amounted to about USD 180 millions.

A new Project Department was opened at KGC to implement the underground project. The process of staffing with high qualified foreign and local specialists is currently ongoing. 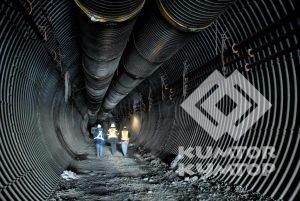