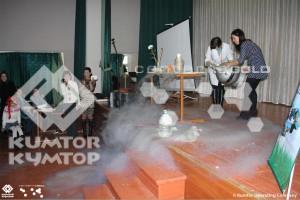 .Under the Small Grants Programme of the Global Environment Fund (GEF), the Akmena Public Association has conducted an environmental action called “Tracing Former Biospheres: A Journey Into the Geological Past of Kyrgyzstan” among Bishkek school students. The action took place in Bishkek-based gymnasium No. 24 on December 15, 2012

The students from eight Bishkek-based schools who assembled in the gymnasium hall were shown stimulating chemical experiments using gases that form the Earth’s atmosphere. Teams from four Bishkek-based schools – No. 6, No. 12, No. 65 and No. 24 – performed a dramatized show explaining a change of climatic periods and the evolution of life on Earth as exemplified by the cities of Bishkek, Osh, Talas, Naryn and Karakol. In a visual form, the viewers were enabled to learn more about the times when these cities were washed by the waves of prehistoric oceans, about the inhabitants of these cities, about the place present-time Kyrgyzstan once occupied on the face of prehistoric continents, when Lake Issyk-Kul was surrounded by a chain of huge fire-spouting volcanoes. Such an innovative approach adopted to explain the climate change problem has enabled the school students to learn more about the modern civilization’s impacts on the climate and what has to be done to keep the climatic balance on the globe.

Following the action, all participating teams received remarkable prizes in the form of books or instruction manuals from the action’s organizers and sponsors, including Kumtor Operating Company, Central Asia Ozone Center, CJSC “Raritet” and the State Agency for the Environment and Forestry under the Government of the Kyrgyz Republic.

Previous publicationFauna & Flora International, with support from Kumtor Operating Company, strives to conserve the biodiversity of one of the largest and most unique nature reserves in Kyrgyzstan Next publicationDigicom Now Accessible to Three Jety-Oguz Communities