With the transition of the Kumtor mine under the control of Kyrgyzstan, the company’s employees have become much more active in introducing their own ideas and projects into production, which improve work and significantly reduce costs. This became possible because now such employees are rewarded with bonuses, and their successful innovations are widely publicized in the team.

One such employee is Kenesh Solpiev, head of the Heavy-Duty Equipment Maintenance Department, who successfully implemented a dozen projects that significantly reduced the company’s costs while improving production processes.

So, for example, based on a design developed by him, a lifting contraption was made when replacing a key element in an excavator – a swivel bearing. Novosibirsk enterprise “Gidrosnab” undertook the manufacture of the equipment. As a result, instead of buying an expensive contraption overseas for $1.8 million, it cost only $380,000. The company saves another 50-80 thousand dollars each time the excavator is dismantled, since the downtime related to replacing a part has been reduced from six weeks to 1-2 weeks.

Upon Solpiev’s suggestion, a project was also implemented to use summer fuel in haul trucks during winter, which will reduce costs by up to $7 million a year. To do this, he proposed the installation of heaters on the tanks of stationary and mobile fuel stations.

According to the expert, when generating and implementing new ideas, management support is very important so that the project is not “frozen” at the implementation stage.

“With the introduction of external management, progress has been made for many ideas. It makes me happy and inspires for new achievements. Prior to the introduction of external management, these works were not so advertised. Now, the policy of the new leadership is to reward all innovative ideas and projects that are actually implemented. Now many employees are motivated and work in this direction,” Solpiev said.

But not all of his ideas are exclusively related to production processes. At the suggestion of the head of the department, as part of work with socially vulnerable groups of the population, more than 20 orphans, graduates of the 27th vocational school, have come to work at the mine since 2022.

“I’ve seen a lot of our interns who have rich parents and have everything at home, but they don’t have much passion for work. And the orphans’ eyes are shining, they want to work and achieve something, they have goals,” Kenesh Solpiev believes.

Also, in relation to human resources, he proposed the introduction of a labor participation rate. This program is an effective tool for individual assessment and bonuses for employees in the Heavy-Duty Equipment and Truck and Light Vehicle Maintenance Departments at Kumtor.

Another idea of Kenesh Solpiev, which was applied and allowed to save about 200-300 thousand dollars, is the refusal of the services of a number of contractors. Their employees were transferred to the Company staff for more favorable working conditions.

And this is far from the entire list of successful projects proposed by the specialist. His projects include the localization of work on restoration of units and components of CAT and Cummins heavy equipment here in Kyrgyzstan, instead of Russia and Kazakhstan. Also, the reorganization of the garage at the mine, relocation of the tire repair shop and many more.

According to Kenesh Solpiev, when a person is interested and loves his work, then production will also rise. 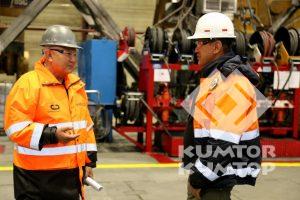 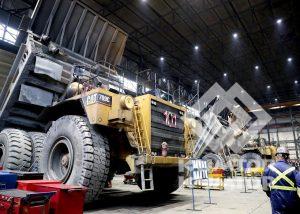 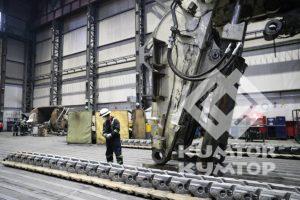 Previous publicationFor the first four months since the beginning of this year, Kumtor has paid a record amount to the budget of the Kyrgyz Republic Next publicationResults of the National Project "School League 2021-2022" have been summarized