Issyk-Kul Farmers Will Be Taught Growing Apricots By International Standards 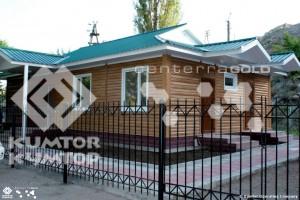 Under the project “A Value Added Chain for Apricots”, KOC’s Regional Information Center will hold a training session for Jety-Oguz and Ton residents on April 26-27, 2012, at Barskoon. The theme of the seminar is “Production Management and Fruit Garden Care”.

The purpose of the project is to create an easily recognizable brand, “apricots from Kyrgyzstan”. According to 2011 reports, Kyrgyzstan ranks 34th among world apricot producers, its yields exceeding 16,600 tons annually. Yet, Issyk-Kul apricots do not always meet competition in Russia’s and Kazakhstan’s markets.

Farmers involved in apricot production point to a number of difficulties, including poor knowledge of value-added chain principles, tree care skills, lack of advanced technologies and absence of contractual relations with processing plants and trading companies.

Under the project, 16 instructors will be trained who, in turn, will train another 240 Jety-Oguz and Ton farmers, thus raising their awareness of advanced apricot production methods meeting international GlobalGAP standards.

A total of 10 seminars will be organized for the trainers and farmers. The project plans to create an apricot demonstration nursery garden and a procurement station in Issyk-Kul province.

Deutsche Gesellschaft für Internationale Zusammenarbeit (German Agency for International Cooperation) or GIZ is a German federal enterprise providing support for individuals and societies in the developing, transition and industrialized economies in their efforts towards building their own capacities and improving living standards. GIZ provides support for the Government of the Federal Republic of Germany in the accomplishment of its goals in the field of international cooperation for the promotion of sustainable development. Besides, GIZ is vigorously engaged in educational activities throughout the world.

AgroLid Association is an agricultural consulting company whose mission is to contribute to the development of farming by building capacities of Central Asian agribusiness players through consultation, educational and information services.

The Program “Sustainable and Equitable Economic Development” is an intergovernmental ecclesiastical organization promoting cooperation, providing financial support and consultations for local organizations and networks that facilitate access to key services, contribute to sustainable economic development and consolidate peace and democracy.