Operating Results of the First Quarter of 2013 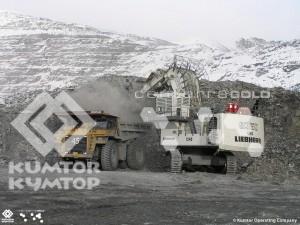 Centerra Gold Inc. (Centerra) and Kumtor Operating Company have summed up the operating results of the first quarter of 2013. In the first three months of 2013, KOC produced 89,618 ounces* or 2,787 kg of gold and contributed more than 1.4 billion soms in taxes and mandatory payments.

The increase in ounces poured was mainly due to processing of higher grade ore that was mined and stockpiled during the fourth quarter of 2012.

Capital expenditures spent and accrued in the first quarter of 2013 at Kumtor amounted to $102.2 million which includes:
– $11.7 million of sustaining capital;
– $16.1 million invested in growth capital primarily for the fleet expansion ($13 million); and
– $74.3 million for capitalized stripping.

All-in cash costs per ounce produced pre-tax were $1,359 in the first quarter of 2013 compared to $2,934 in the same quarter of 2012. The decrease is due to both higher production and a reduction in growth capital spending. During the comparative period in 2012 Kumtor expanded the mining fleet at a cost of $77.1 million or $1,270 per ounce produced. The impact of the expanded mining fleet in 2012 was partially offset by lower operating costs and capitalized stripping as the operating time in 2012 was reduced by ten days due to the work stoppage.

Including revenue-based taxes, Kumtor’s all-in cash costs per ounce produced for the first quarter of 2013 was $1,591 compared to $3,183 in the comparative quarter of 2012.

Exploration expenditures totaled $2.4 million for the first quarter of 2013.

A complete listing of the drill results and supporting maps for the Kumtor pit have been filed on the System for Electronic Document Analysis and Retrieval (‘SEDAR’) at www.sedar.com and are available at the Company’s web site at: www.centerragold.com.

* The final product of the Kumtor mine, the Doré bars,3 is purchased by Kyrgyzaltyn JSC for processing at its refinery in Kara-Balta pursuant to a Gold and Silver Sales Agreement signed by KOC, Kyrgyzaltyn and the Government of the Kyrgyz Republic. Kyrgyzaltyn JSC enjoys the exclusive right to sell refined gold and silver both in and outside the Kyrgyz Republic.
** All-in cash cost (pre-tax) includes the following costs: operating cash costs (mainly mining, processing, production taxes (excluding revenue-based taxes) and administrative expenses), sustaining and growth capital (including capitalized stripping), exploration expenses and community investments.
The Company has decided to move toward reporting an “all-in cash cost” methodology for gold production. The Company believes an all-in cash cost measure more fully reflects the actual cost of producing gold. All-in cash cost (pre-tax) is non-GAAP measure.

During the first three months of 2013, contributions to the national budget in taxes, deductions to the Social Fund and other mandatory payments have totaled 1.44 billion soms.

In 2013, approximately 55% of Kumtor’s gold production is expected to occur in the fourth quarter as a result of ore production planned to come from the high-grade SB Zone ore that has several years of production history. The high-grade ore from the SB Zone is only available for mining at the end of the third quarter when it is exposed by Cut Back 15 creating a potential variability to Kumtor’s 2013 production guidance. This variability will not change the total production at Kumtor which is expected to be between 550,000 and 600,000 ounces in 2013.

Total capital expenditures, excluding capitalized stripping, are forecast to be $95 million in 2013 including $64 million of sustaining capital. The largest sustaining capital spending will be the major overhaul maintenance of the heavy duty mine equipment ($29 million), purchase of new mining equipment ($17 million), tailings dam construction raise ($5 million) and other items ($13 million).

Growth capital investment at Kumtor for 2013 is forecast at $31 million, which includes the relocation of certain infrastructure at Kumtor related to the KS-13 life-of-mine expansion ($26 million) and other items ($5 million). The cash component of capitalized stripping costs related to the development of the open pit are expected to be $212 million in 2013.

Michael Fischer, President of Kumtor Operating Company, commented, “In the first quarter of 2013, the Company expedited the planned demolition and relocation of certain infrastructure due to an increase in movement of the waste-rock dump. Employees have been moved to temporary work locations until the planned new facilities are constructed. The Company has taken every possible step to ensure continued safe operations. Despite these circumstances, mine production is on track to achieve the annual gold production forecast with over 50% of the gold production occurring in the fourth quarter.”

The Kumtor open pit mine, located in the Kyrgyz Republic, is the largest gold mine in Central Asia operated by a Western-based producer. It has been operating since May 1997 and, as of March 31, 2013, has produced approximately 8.7 million ounces or 271 tonnes of gold.

Centerra Gold Inc. (Centerra) is a gold mining company focused on operating, developing, exploring and acquiring gold properties primarily in Asia, the former Soviet Union and other emerging markets worldwide. Centerra is a leading North American-based gold producer and is the largest Western-based gold producer in Central Asia. Centerra’s shares trade on the Toronto Stock Exchange (TSX) under the symbol CG. The Company is headquartered in Toronto, Canada.

Currently, Centerra has two producing gold mines in the Kyrgyz Republic and Mongolia. The Company also owns Oksut Project, Turkey, and has interests in the promising exploration properties in Mongolia, China and Russia.