“Signing of an agreement with Centerra Gold is definitely the most beneficial and the right decision for Kyrgyzstan” – Dmitry Dolmatov, Lawyer

On Monday, April 4, 2022, President of the Kyrgyz Republic Sadyr Japarov announced the signing of an Agreement between the Cabinet of Ministers and Centerra Gold, resolving disagreements on the management of Kumtor Gold Company CJSC. According to this document, the Cabinet of Ministers of Kyrgyzstan received the right to full management and ownership of the Kumtor mine.

Dmitry Dolmatov, a legal consultant of Kumtor Gold Company, shared his position on the importance of the signed document in the current economic situation. He represented the interests of Kyrgyzstan and took part in all negotiations with the Canadian company. The interview aired on “Piatyi Kanal”(Channel Five).

“If a political decision were made to continue these processes in New York and Stockholm, it would take five to seven years and it would cost the state about a hundred million dollars, that’s primarily the services of international law firms. Therefore, I believe that reaching a compromise in this case is a very optimal situation for Kyrgyzstan. This agreement takes into account the interests of the Kyrgyz Republic. I think we did a very good job together and found the best way to resolve the conflict.” 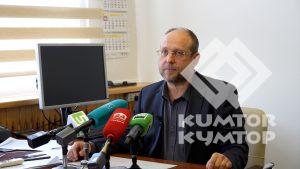