Contribution to the national budget in taxes and mandatory payments in 2020 is 14.5 billion soms.

The 2021 Kumtor Technical Report provides an update of the 2015 technical report, including a mineral resource model update based on extensive in-fill and expansion drilling in recent years. The 2021 Kumtor Technical Report also revised the gold price assumptions, pit slope angles, capital and operating cost estimates and metallurgical recovery estimates based on process plant improvements, all of which has resulted in updated mineral resource and mineral reserve estimates, a revised ultimate pit design and an updated mining plan. The technical report was prepared in accordance with National Instrument 43-101 Standards of Disclosure for Mineral Projects (“NI 43-101”) and filed on SEDAR on February 24, 2021 with an effective date of July 1, 2020. 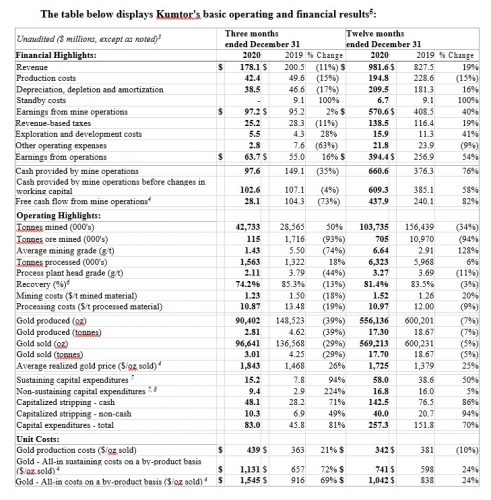 In 2020, Kumtor finished mining cut-back 19 and continued stripping and managing the ice from cut-back 20. Tonnes mined were 103.7 million tonnes in 2020 compared to 156.4 million tonnes in 2019. The decrease was primarily due to the suspension of mining operations from December 2019 to mid-January 2020, longer haulage distances as a result of the change in the waste dump location from the Lysii Valley to the Central Valley for the first half of the year and lower equipment utilization due to workforce availability (primarily COVID-19 related). Of the 103.7 million tonnes mined in 2020, 101.6 million tonnes were capitalized as waste stripping for benefit of future production from cut-back 20.

Gold production costs in 2020 were $342 per ounce compared to $381 per ounce in 2019. The decrease was primarily due to increased tonnes processed, partially offset by lower grades and recovery.

During 2020, mining costs were $1.52 per tonne compared to $1.26 per tonne in 2019. The increase was primarily due to lower tonnes mined, and longer haulage distances, partially offset by lower diesel fuel prices, lower maintenance costs and a favourable foreign currency exchange rate movement.

Processing costs were $10.97 per tonne in 2020 compared to $12.00 per tonne in 2019. The decrease was primarily due to increased tonnes processed and lower maintenance costs as a result of less maintenance activities performed due to COVID-19.

During 2020, all-in sustaining costs on a by-product basis, which excludes revenue-based tax were, $741 per ounce compared to $598 per ounce in 2019. The increase was mainly due to higher capitalized stripping costs, fewer ounces sold, higher sustaining capital representing the purchase of eleven haulage trucks to increase mining capacity and higher Strategic Agreement contributions to the various regional funds in the Kyrgyz Republic. This was partially offset by lower production costs.

All-in sustaining costs on a by-product basis, which excludes revenue-based tax, were $1,131 per ounce in the fourth quarter of 2020 compared to $657 per ounce in the fourth quarter of 2019. The increase was primarily due to fewer ounces sold, an elevated level of capitalized stripping costs as mining activities were concentrated on stripping cut-back 20 and greater sustaining capital costs relating to rebuilds and haul truck fleet expansion, partially offset by lower production costs. 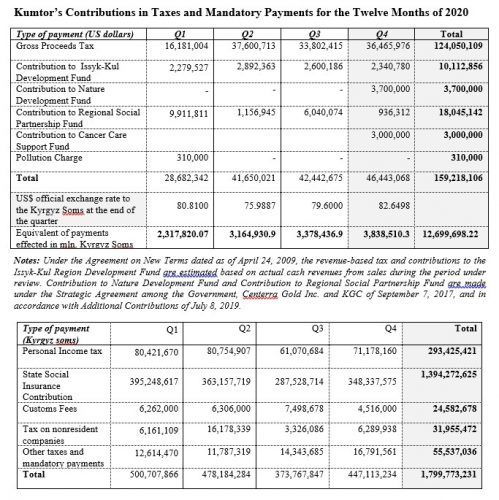 Payments within the Kyrgyz Republic 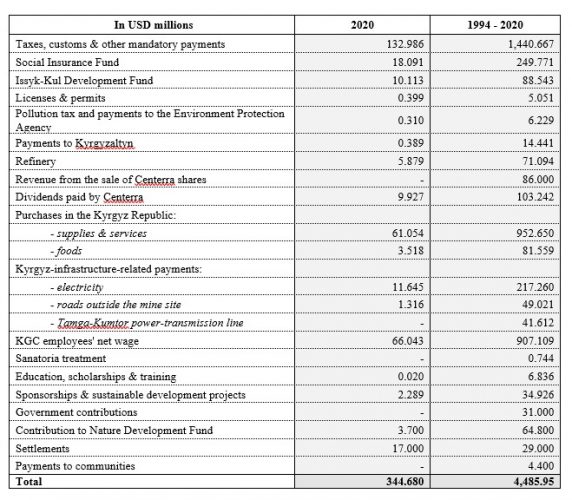 Kumtor’s Impact on the Macroeconomic Performance of the Kyrgyz Republic

According to preliminary reports of the Kyrgyz Republic National Statistics Committee,

Scott Perry, President and Chief Executive Officer of Centerra stated, “Kumtor had another strong year where gold production was at the top end of guidance delivering 556,136 ounces of gold at an all-in-sustaining cost on a by-product basis of $741 per ounce sold, which was lower than the low-end of its all-in-sustaining cost guidance.”

“During the year, the Company repaid its debt and ended the year with no debt and cash of $545.2 million. In January 2021, we completed the sale of our 50% interest in the Greenstone Gold Mines Partnership and received a cash payment of approximately $210 million (including adjustments) adding to our strong balance sheet.”

“Based on the Company’s financial position, recent strong operating results and cash flows, the Board approved a quarterly dividend to CAD$0.05 per share on February 23, 2021.”

“The updated Kumtor Mine Technical Report was filed on SEDAR on February 24, 2021, showcasing an extended mine life for Kumtor. The new Kumtor life-of-mine adds significantly to the open pit reserves and has extended Kumtor’s mine life by 5 years. The new mine life is 11 years and milling operations are extended to 2031. The new life of mine plan has consistent annual gold production averaging 590,000 ounces for 5 years commencing in 2022 at an average life of mine all-in sustaining costs on a by-product basis of $828 per ounce sold.”

The Kumtor open pit mine, located in the Kyrgyz Republic, is one of the largest gold mines in Central Asia operated by a Western-based gold producer. It has been in production since 1997 and has produced over 13.2 million ounces of gold to December 31, 2020.

Centerra Gold Inc. is a Canadian-based gold mining company focused on operating, developing, exploring and acquiring gold properties in North America, Asia and other markets worldwide and is one of the largest Western-based gold producers in Central Asia. Centerra operates three mines, the Kumtor mine in the Kyrgyz Republic, the Mount Milligan mine in British Columbia, Canada and the Öksüt mine in Turkey. Centerra’s shares trade on the Toronto Stock Exchange (TSX) under the symbol CG. The Company is based in Toronto, Ontario, Canada.

The Kyrgyz Republic, via Kyrgyzaltyn JSC, is Centerra Gold’s largest shareholder owning 77,401,766 common shares. As of March 12, 2021, Kyrgyzstan’s interests were estimated at $ 772 million.

Additional information on Centerra Gold Inc. and the full text of the news release on the 2020 Fourth Quarter and 2020 Year-end Results are available on SEDAR at www.sedar.com and the corporate websites at www.centerragold.com and www.kumtor.kg.