Operating Results of the 2nd Quarter of 2013 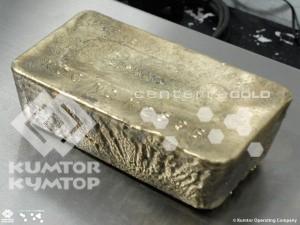 Centerra Gold Inc. (Centerra) and Kumtor Operating Company have summed up the operating results of the 2nd quarter of 2013. In the first six months of 2013, the Kumtor mine produced 161,983 ounces* or 5,038 kg of gold. The Company has contributed more than 2.8 billion soms in taxes and mandatory payments.

Gold sales in the second quarter of 2013 were 70,318 ounces, or approximately 2.2 tonnes (2,187.2 kg). Total revenue from gold sales in the second quarter of 2013 was $96.5 million*.
The Dore bars produced by the Kumtor mine are purchased by Kyrgyzaltyn JSC for processing at the Kara-Balta refinery pursuant to a Gold and Silver Sales Agreement signed by KOC, Kyrgyzaltyn and the Government of the Kyrgyz Republic. Kyrgyzaltyn JSC enjoys the exclusive right to sell refined gold and silver both in and outside the Kyrgyz Republic.

Capital expenditures in the second quarter of 2013 at Kumtor amounted to $101.5 million which includes:
– $15.1 million of sustaining capital***;
– $9.3 million invested in growth capital*** for the fleet expansion;
– $77.2 million for capitalized stripping.

Exploration expenditures totaled $2.0 million for the second quarter of 2013.
A complete listing of the drill results and supporting maps for the Kumtor pit have been filed on the System for Electronic Document Analysis and Retrieval (‘SEDAR’) at www.sedar.com and are available on Centerra’s web site at www.centerragold.com

Centerra’s Board of Directors has authorized a dividend of Cdn$0.04 per common share. The dividend is payable on August 29, 2013, to shareholders of record on the Toronto Stock Exchange on August 15, 2013.

Operating Results for the Kumtor Project

* All-in cash cost (pre-tax) include operating cash costs (mining, processing, production taxes (excluding the revenue-based tax) and administrative expenses), and sustaining and growth capital (including capitalized stripping).
Operating cash cost, all-in cash cost pre-tax and including tax, average realized gold price, and cost of sales per ounce sold are non-GAAP measures and are discussed under “Non-GAAP Measures” in Centerra’s MD&A filed on SEDAR.
The Company has decided to report all-in cash costs because it believes that this measure reflects more precisely the actual amount of production costs.
Operating cash cost and capital expenditures for 2012 have been restated to reflect the impact of the adoption of IFRIC 20 on January 1, 2013.

During the first six months of 2013, contributions to the national budget in taxes, deductions to the Social Fund and other mandatory payments totaled 2.8 billion soms.

Evaluating the results of the second quarter of 2013, Michael Fischer, President of KOC, commented, “We are happy to report that the waste dump movement has slowed and stabilized. At Kumtor work on the infrastructure relocation continues and our 2013 waste dump management plan was modified. We are also happy to report that the movement rates of ice and waste in the high movement area are as expected and the stripping of waste is on track to allow access to the higher grade ore by the end of the third quarter. The mine has returned to normal operations and we expect Kumtor to achieve its gold production guidance for the year.”

In 2013, approximately 55% of Kumtor’s gold production is expected to occur in the fourth quarter. Ore production in the fourth quarter is planned to come from the high-grade SB Zone ore that has several years of production history and the grade and recovery are well known. The high-grade ore from the SB Zone will be only available for mining at the end of the third quarter to enable the Company to produce the expected 550,000 to 600,000 ounces of gold in 2013.

Total capital expenditures, excluding capitalized stripping, are forecast to be $97 million in 2013, including:
– $67 million of sustaining capital3 (major overhaul maintenance of the heavy duty mine equipment and purchase of new mining equipment, tailings dam construction raise, etc.);
– $30 million of growth capital3, including the relocation of certain infrastructure at the mine.
The cash component of capitalized stripping costs related to the development of the open pit is expected to be $196 million in 2013.

The Kumtor open pit mine, located in the Kyrgyz Republic, is the largest gold mine in Central Asia operated by a Western-based gold producer. It has been operating since May 1997 and, as of June 30, 2013, has produced approximately 8.86 million ounces or 275.6 tonnes of gold.

Centerra Gold Inc. (Centerra) is a gold mining company focused on operating, developing, exploring and acquiring gold properties primarily in Asia, the former Soviet Union and other emerging markets worldwide. Centerra is a leading North American-based gold producer and is the largest Western-based gold producer in Central Asia. Centerra’s shares trade on the Toronto Stock Exchange (TSX) under the symbol CG. The Company is headquartered in Toronto, Canada.

Currently, Centerra has two producing gold mines located in the Kyrgyz Republic and Mongolia. The Company also owns the Oksut Project in Turkey, and has interests in promising exploration properties in Mongolia, Turkey, China and Russia.

Additional information on Centerra and the full text of its news release on the results of the second quarter of 2013 are available on SEDAR at www.sedar.com and www.centerragold.com. Information on KOC is available at www.kumtor.kg

* – One Troy ounce equals to 31,10348 grammes..
** – Unless specified otherwise, all dollar figures in this news release are in US dollars.
*** – Non-GAAP measure, see “Non-GAAP Measures” discussed in Centerra’s MD&A filed on SEDAR.