Kumtor Gold Company CJSC (KGC) continues to actively participate in the “Jashyl Muras” (“Green Heritage”) National Campaign launched on March 12, announced by the President of the Kyrgyz Republic Sadyr Japarov as part of the Year of Mountain Ecosystem Protection and Climate Resilience. In Bishkek and Chui oblast, KGC employees helped to plant the territories of the Mukash Abdraev Republican Secondary Special Music Boarding School, the Altyn Tuyun Republican Children’s Engineering Academy, and the Belovodsk Children’s Psychoneurological Social Institution under the Ministry of Labor and Social Development.

In Issyk-Kul Region, the environmental campaign began in Karakol, where seedlings of various species were purchased and planted with the sponsorship of KGC. In addition to Kumtor employees, employees of the Karakol CMayor’s Office, members of the Karakol Destination non-profit organization, and students of the Issyk-Kul State University named after K. Tynystanov took part in the tree planting.

Tree planting continued in the Barskoon gorge of the Jety-Oguz region, where 150 willow seedlings and 150 Schrenk’s spruce trees were planted on the 14th km of the technological road leading to the Kumtor mine. All KGC interns from the Uchkun office and employees of the sustainable development, HR and environmental departments took part in the campaign. The plantings were fenced with wooden pallets to protect from animals. Note that planting trees along the technological road is one of the measures to reduce the impact of dust from heavy vehicles. The contracting organization Rus-Grand LLC engaged in dust suppression of the technological road commited to regularly water and take care of the plantings. 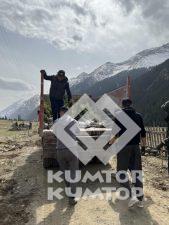 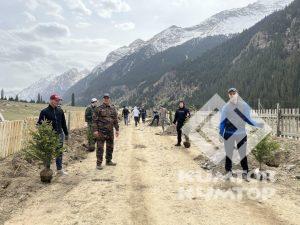 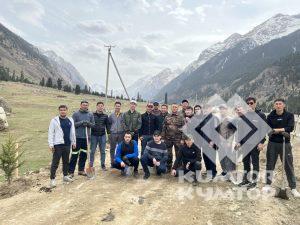