Kumtor Gold Company CJSC (KGC) continues to prepare the preliminary results of its activities in 2021.

The technological scheme of flotation concentrate leaching was changed at Kumtor Mill, and this allowed to increase the gold recovery and to reduce the reagent consumption.

During the Temporary External Management period at KGC, the following measures were reviewed and implemented to improve the efficiency of the Mill’s operations:

Flotation tests were conducted jointly with an international company, a manufacturer of the latest generation flotation machines, which have no analogues in the world at the time being.

Work is underway to introduce process automation based on artificial intelligence. The implementation of this system will eliminate all human error factors and maintain all technological indicators at the highest level, as well as increase the current gold recovery by 5%.

During the temporary external management period significant changes were made in the employee training process. 19 students took production practice. 20 interns were admitted to the Mill units, of which the best 4 were employed by KGC before the end of the internship period. It is planned to additionally recruit 22 interns, this will allow to prepare a qualified pool of employees not only for KGC, but also for future mineral resources projects. 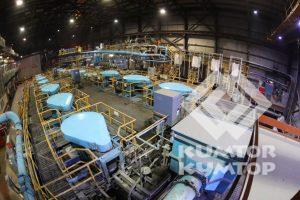