On March 21-22, 2018, with the support of the Kumtor Ambassadors, the Spring Tournament of the Juvenile Table Tennis League was held involving children from orphanages, boarding schools and specialized children’s care centers of the Kyrgyz Republic.

The event was sponsored by the Public Charity Fund “New Opportunities” with the assistance of the Table Tennis Association of the Kyrgyz Republic.
It will be recalled that in May 2017, Kuvanych Kozhegulov, a Kumtor employee, and a group of activists comprising Kumtor Gold Company’s employees, launched a project designed to encourage sports in Kyrgyzstan’s children’s homes. They came up with the idea of creating a permanent Juvenile Table Tennis League designed to promote this sport in the Kyrgyz Republic, enhance the role played by physical culture and sport in the all-round and harmonious development of an individual, health promotion among the younger generation and involvement of students in regular physical culture and sports activities. It was decided that two tournaments would be held for children from the orphanages of the Kyrgyz Republic, in autumn and spring, during school breaks as part of the Juvenile League’s activities. This initiative was supported by the Table Tennis Association of the Kyrgyz Republic.

Competing in two categories, 7-11 years of age and 12-17, the tournament participants won team prizes and individual medals in events among boys and girls. The winners received their cups, medals, certificates and valuable gifts provided by sponsors. 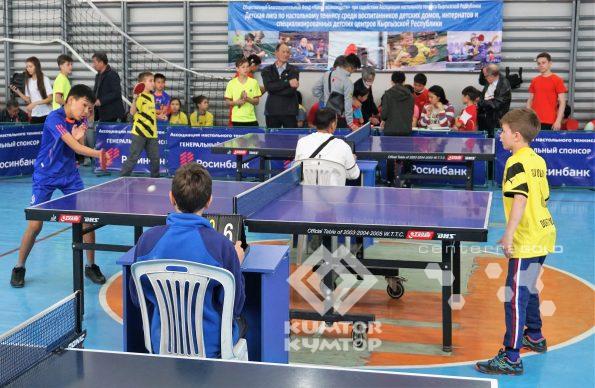