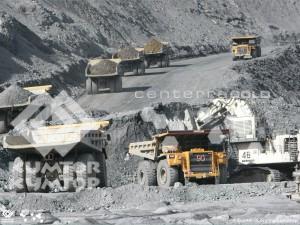 Capital expenditures were $180.7 million**, while exploration expenditures totaled $12.7 million for the full year 2011. Taxes and other mandatory payments have exceeded $173.7 million, or more than 8 billion soms.

For other operating and financial results see Tables #2 and #3.

In 2011, exploration continued in the Central Pit area and within the concession area.

Due to the aggressive exploration program, including one in the Central Pit area, the reserves are approximately 6.3 million contained ounces, despite the processing of 709,000 contained ounces in 2011. Exploration in the southwest portion of the SB Zone has shown an increase of reserves amenable to open pit mining.

To view the graphics, maps/drill sections and complete drill results discussed in this news release, please visit the following link (SEDAR) or visit the Company’s web site at: www.centerragold.com

Reserves and resources at Kumtor****


**** – The reserves and resources include those of the open-pit area as well as of the Southwest, Northeast and Sarytor deposits.
***** – “OP” means open pit and “UG” means underground.

Contributions to the Kyrgyz national budget and other mandatory payments

During the twelve months of 2011, payments to the Kyrgyz national budget, including taxes, contributions to the Social Fund and other mandatory payments by the Company, exceeded $173.8 million, which, according to the KR National Bank’s exchange rate as of December 31, 2011, is equivalent to approximately 8.08 billion soms.

As previously disclosed, in May 2011 Centerra Gold Inc. (Centerra) paid dividends to all shareholders registered with the TSX.

At the KR Government’s request, Kumtor contributed $10 million for the construction and renovation of schools in Kyrgyzstan in September, 2011.

Payments effected within the Kyrgyz Republic

During the period between 1994 and 2011, Kumtor Gold Project’s payments within the Kyrgyz Republic have totaled $1.852 billion.

For general payments within the Kyrgyz Republic see Table #4.

According to the KR National Statistics Commitee’s preliminary reports,

Kumtor Gold Project’s Payments Made within the Kyrgyz Republic

The 2012 production profile at Kumtor differs from last year. Kumtor’s 2012 gold production is forecast to have 12% of gold production being recovered in the first quarter, 20% in the second quarter, 25% in the third quarter and 43% in the fourth quarter.

Achieving the 2012 production is dependent on the timely delivery of new mining equipment and successfully maintaining the mining rates of the waste and ice in the southeast portion of the pit to gain access to the higher grade ore.

At Kumtor, 2012 total capital expenditures are forecast to be $373 million, including $328 million of growth capital investment and $45 million of sustaining capital.

Growth capital investment will largely include the development of the open pit ($128 million), purchase of new mining equipment including 25 CAT 789 haul trucks, 4 drills and 4 Hitachi 3600 shovels ($126 million), and other items ($11 million). Also, $63 million will be spent on capital purchases and underground development.

Exploration expenditures in 2012 are expected to be $15 million.

Michael Fischer, President of Kumtor Operating Company, commented: “We achieved our gold production guidance for 2011 and showed good performance in occupational safety. In 2012, we have new tasks to accomplish. We must significantly expand and renew our mining fleet, achieve the connection of the declines and focus on preparations for handling higher-grade material in the fourth quarter, when we access the ore body in the southeast portion of the pit. That is why Kumtor’s 2012 planned mining sequence results in a production profile with the smallest portion of the gold production occurring at the beginning of the year and the largest portion occurring at the end of 2012. We hope we will succeed in achieving our gold production guidance in spite of the work stoppage in February 2012”.

● ● ●
The Kumtor open pit mine, located in the Kyrgyz Republic, is the largest gold mine in Central Asia operated by a Western-based producer. It has been operating since May 1997 and, as of December 31, 2011, has produced approximately 8.4 million ounces or 260.7 tonnes of gold.

The full text of the news release on the 2011 results is available on SEDAR at www.sedar.com and the Centerra’s website at www.centerragold.com . Additional information about Kumtor is available on the corporate website www.kumtor.kg

**– Unless specified otherwise, all dollar figures in this news release are in US dollars.

***– The Dore bar, Kumtor’s final product, contains up to 85% of gold as well as silver, iron, zinc, copper and nickel.