The table below displays Kumtor’s basic operating and financial results: 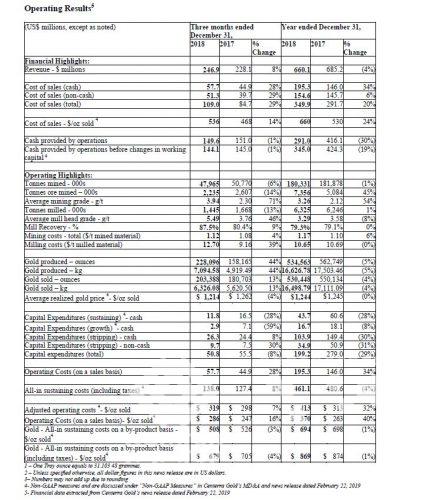 Mining costs, including capitalized stripping, totalled $211.1 million in 2018 compared to $199.8 million in 2017. Increased costs in 2018 include higher diesel fuel costs ($21.4 million), which was due to higher fuel prices and higher consumption resulting from increased haulage distances. This was partially offset by lower maintenance cost on the haul trucks and the Liebherr shovels in 2018 as compared to 2017, lower camp catering costs and benefits from continuous improvement initiatives.

Milling costs totaled $67.3 million in 2018 compared to $66.7 million in 2017. This increase is attributable to higher reagents and consumables costs due to higher mill throughput. These were partially offset by lower maintenance costs ($3.3 million).

Site support Costs
Site support costs in 2018 totalled $51.7 million compared to $45.1 million in the comparative year. This increase is attributable to camp charges which ceased to be allocated to mining andmilling activities starting in 2018, partially offset by lower insurance premiums.

All-in sustaining costs on a by-product basis per ounce sold4, which excludes revenue-based tax, was $694 in 2018 compared to $698 in 2017. The decrease was mainly due to lower capitalized stripping costs and decreased sustaining capital expenditures, partially offset by fewer ounces sold.

During the fourth quarter of 2018, exploration drilling programs continued with the completion of sixty diamond drill holes for 15,239 metres. A total of 24,381 metres in ninety-two drill holes were completed in 2018, including 2,308 metres of infill drilling in the SB Zone. Exploration drilling focused on testing zones of mineralization near the surface for the north-east side of the Central Pit, at the corridor between the Central and Southwest pits, and on the flanks of the Northeast target area. 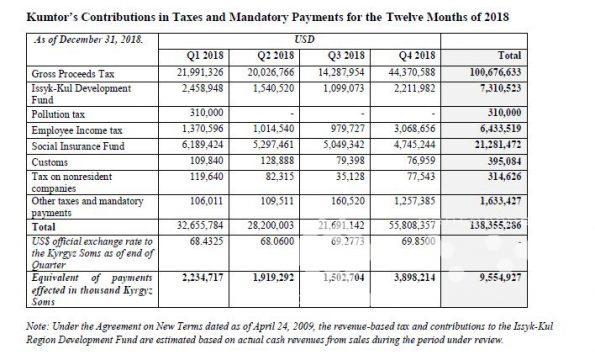 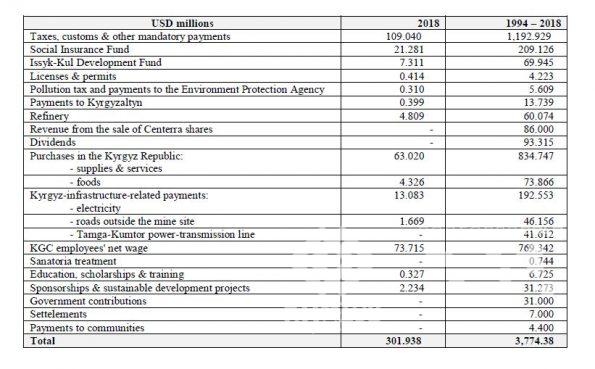 Scott Perry, President and Chief Executive Officer of Centerra Gold stated, “Kumtor had another strong year exceeding its revised production guidance and beating its all-in-sustaining cost guidance, delivering 534,563 ounces of gold production at an all-in-sustaining cost on a by-product basis of $694 per ounce sold. Gold production at Kumtor is expected to be evenly weighted for the first three quarters of 2019 with the fourth quarter representing approximately 28% of the full year’s gold production forecast.”
“The Company continued to work with the Government of the Kyrgyz Republic to satisfy the conditions precedent to completion of the comprehensive settlement agreement entered into with the Government on September 11, 2017. The longstop date for satisfaction of all such conditions was extended a number of times by agreement of all parties and is now May 31, 2019.”

The Kumtor open pit mine, located in the Kyrgyz Republic, is one of the largest gold mines in Central Asia operated by a Western-based gold producer. It has been operating since May 1997 and has produced over 12 million ounces or 374.31 tonnes of gold to December 31, 2018.

Centerra Gold Inc. is a Canadian-based gold mining company focused on operating, developing, exploring and acquiring gold properties in North America, Asia and other markets worldwide and is the largest Western-based gold producer in Central Asia. Centerra operates two flagship assets, the Kumtor Mine in the Kyrgyz Republic and the Mount Milligan Mine in British Columbia, Canada and is currently building its next gold mine, the Öksüt Gold Mine in Turkey. Centerra Gold’s shares trade on the Toronto Stock Exchange (TSX) under the symbol CG. The Company is based in Toronto, Ontario, Canada.

The Kyrgyz Republic, via Kyrgyzaltyn JSC, is Centerra Gold’s largest shareholder owning 77,401,766 common shares. As of March 19, 2019, Kyrgyzstan’s interests were estimated at $ 404 million.