Operating Results of the Third Quarter of 2020

Centerra Gold Inc. (Centerra) and Kumtor Gold Company (KGC) have summed up their operating results in the third quarter of 2020. For the nine months of 2020, KGC produced 465,734 ounces ¹ or 14,485.95 kg of gold and contributed more than 10.21 billion soms in taxes and mandatory payments.

Despite political and social disruption in the Kyrgyz Republic following its recent Parliamentary election held during the first week of October 2020, operations at the Kumtor Mine continue. Mining and gold production continue at targeted rates, and regular gold shipments are being made. No disruptions have occurred to the mine’s supply chain as borders are open for cargo and customs is functioning normally.

The Company understands that other mining companies within the Kyrgyz Republic experienced property damage and interruption in their operations in connection with protests that occurred following the October 4, 2020 parliamentary elections. While Kumtor did not experience any material issues at its offices or mine site, the Company and Kumtor will continue to remain on alert. The Company is monitoring the situation and is taking all the necessary precautions to ensure the safety of its personnel and operations. Centerra and Kumtor will continue to cooperate and work with the Kyrgyz Government and state agencies to ensure uninterrupted operation of the mine.

Kumtor continues to implement mitigation controls and health & safety precautions at the mine site to contain the spread of COVID-19. As previously noted, the Company observed an effect on the availability of Kumtor’s workforce due to a greater rate of COVID-19 infections and other illnesses in the Kyrgyz Republic. As a result, open pit mining began operating at less than full capacity in July, but returned to full capacity in September. Mill processing operations continue to work at full capacity throughout the quarter and are expected to maintain gold production by processing stockpiles as originally planned for the year.

It should be noted that in October 2020, there has been a significant increase in reported COVID-19 cases in the Kyrgyz Republic that may result in subsequent changes to operational plans.

On September 1, 2020, Kumtor Gold Company (Kumtor) transferred 78,468,300 soms (an equivalent of US $1 million, according to the official National Bank exchange rate as of September 1, 2020) to the account of the Health Ministry of the Kyrgyz Republic for repair of healthcare institutions across the country and equipping them with medical appliances.

The Company continues to carry out further required technical work on the Kumtor life of mine plan, including with respect to mining costs, recoveries and waste rock stability assessments in view of the fatal accidents that occurred at the Lysii Waste Rock Dump in December 2019. Once that technical work has been completed, the Company expects to be in a position to release a new technical report for the Kumtor Mine. At the same time, the Company is continuing to monitor the ongoing political developments in the Kyrgyz Republic and to assess the risks associated with the further potential investments in the Kumtor Mine.

In July 2020, Kumtor received a permit to utilize the Lysii Valley for dumping waste rock going forward. Lysii Valley is expected to be the main mine waste rock dump for the next two years as it is closest to cut back 20. Construction and preparation of haul roads were completed in the third quarter. According to the new waste dumping plan in the Lysii Valley, waste rock will be placed at the base of the valley initially and the waste rock dump will be developed up the valley creating slightly longer haulage distances in the near-term.

Production costs per ounce of gold sold were $326 per ounce in the third quarter of 2020, compared to $404 in the third quarter of 2019. The decrease was primarily due to lower processing costs per tonne, and a significant decrease in the amount of ore being mined at Kumtor, resulting in higher costs capitalized as stripping and charged to depreciation.

The drilling program for 2020 includes 55,000 planned metres of exploration drilling, which is focused on priority and high potential targets. Primary targets include various zones of the Central, Southwest and Sarytor deposits where positive drilling results between 2018 and 2019 had been identified. During the third quarter of 2020, exploration drilling programs continued with the completion of 45 diamond drill holes and 11 reverse circulation (RC) drill holes totalling 11,412 metres. Exploration drilling focused on testing zones of sulphide (Central Pit – Northeast wall) and oxide mineralization, at the corridor between the Central and Southwest pits (Hope, Triangle and Southwest Oxide Deep zones), on the periphery of the Sarytor and Northeast Deposits and Muzdusuu Zone (Central Deposit). 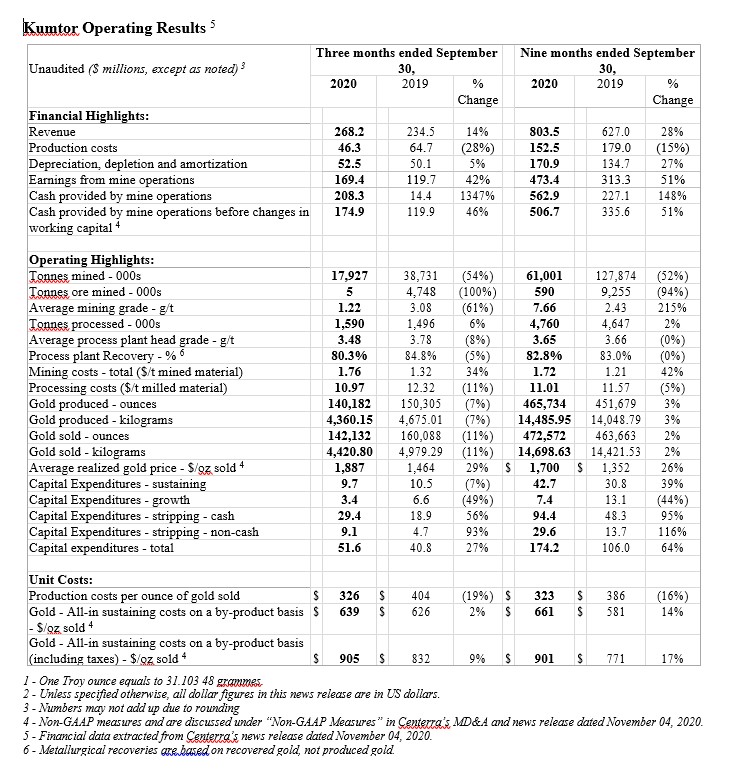 During the nine months of 2020, contributions to the national budget in taxes, deductions to the Social Fund and other mandatory payments have totaled 10.21 billion soms. 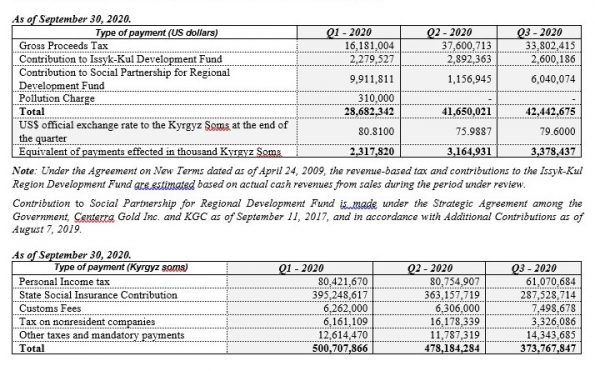 Scott Perry, President and Chief Executive Officer of Centerra stated, “We continue to stay vigilant at all of our operations to prevent an outbreak and avoid the spread of the COVID-19 virus and to ensure the health, safety and well-being of our employees, contractors and communities. We are also carefully observing the unfolding political events in the Kyrgyz Republic in order to ensure uninterrupted operations at Kumtor.”

“The strong operating performance at Kumtor and Mount Milligan continued into this quarter and our Öksüt Mine demonstrated the additional value it brings to our operating portfolio on all metrics; production, low cost and cash flow generation”.

“We continue to advance the Kumtor technical report, with additional work being incorporated into the new life of mine plan with respect to mining costs, recoveries and waste rock stability assessments.”

The Kumtor open pit mine, located in the Kyrgyz Republic, is one of the largest gold mines in Central Asia operated by a Western-based gold producer. It has been in production since 1997 and has produced over 13.1 million ounces of gold to September 30, 2020.

Centerra Gold Inc. is a Canadian-based gold mining company focused on operating, developing, exploring and acquiring gold properties in North America, Asia and other markets worldwide and is one of the largest Western-based gold producers in Central Asia. Centerra operates three mines, the Kumtor Mine in the Kyrgyz Republic, the Mount Milligan Mine in British Columbia, Canada and the Öksüt Mine in Turkey. Centerra’s shares trade on the Toronto Stock Exchange (TSX) under the symbol CG. The Company is based in Toronto, Ontario, Canada.

Additional information on Centerra Gold Inc. and the full text of the news release on the Third Quarter of 2020 are available on SEDAR at www.sedar.com and the corporate websites at www.centerragold.com and www.kumtor.kg.