Operating Results of the First Quarter of 2020

Centerra Gold Inc. (Centerra) and Kumtor Gold Company (KGC) have summed up their operating results in the first quarter of 2020. In the first three months of 2020, KGC produced 152,307ounces¹ or 4737.28 kg of gold and contributed more than 2.82 billion soms in taxes and mandatory payments.

In view of, among other things, the urgent need for regional development in the Kyrgyz Republic, Kumtor Gold Company determined that additional contributions to the previously established Kyrgyz Republic Social Partnership for the Regional Fund were appropriate. Accordingly, it made a further $9 million contribution to the Regional Fund in March 2020 and intends to make further contributions of $2.2 million each quarter the mine is in operation, up to a total of $22.0 million.

On February 15, 2020, an employee fatality occurred at Kumtor when an excavator slipped down into a water-filled basin near the edge of Petrov Lake, which is situated five kilometres northeast of the Kumtor mill site. An internal investigation was conducted, and management collaborated closely with the Kyrgyz regulators and other state authorities to ascertain the cause of the incident.

On December 1, 2019, Kumtor experienced a significant waste rock movement at the Lysii waste rock dump, resulting in two employee fatalities. The Company initiated an emergency evacuation of all mine personnel from the area and an immediate cessation of mining operations. In January 2020, after an extensive search and in consultation with the families of the deceased Kumtor employees, search efforts were terminated. In late January 2020, after significant analysis of its procedures, including safety procedures, and consultation and approval of the relevant the Kyrgyz Republic state agencies, the Company recommenced mining operations, placing waste rock materials on the Central Valley waste rock dump after receiving approvals for its revised 2020 mining plans. Currently, Kumtor is not permitted to place waste rock materials at the Lysii waste rock dump as was contemplated in the initial 2020 mine plan.

A normal course updated Kumtor Technical Report is expected to be completed in the second half of 2020.

During the first quarter of 2020, with the support of the Kyrgyz Republic Government, Kumtor has implemented a number of proactive measures to prevent the spread of COVID-19 such as extending mine site crew rotations, separating key process plant personnel from mining crews, increasing health hygiene protocols, maintaining social distancing to ensure the safety of its employees, contractors, communities and other stakeholders, as well as, to try to ensure the uninterrupted flow of its supply chain to ensure the continuation of operations. Despite the strict restrictions imposed by the Government of the Kyrgyz Republic on the movement of people and goods within the country, the Government has been supportive of Kumtor’s continued operations. 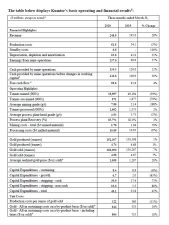 During the first quarter of 2020, after restarting mining operations in January following the Lysii waste rock dump incident, Kumtor finished mining cut-back 19 West and the SB Zone and continued stripping and unloading ice from cut-back 20.

Tonnes mined were 20.0 million compared to 49.2 million tonnes in the comparative prior year period, representing a decrease of 59%, mainly due to the suspension of operations from December 2019 to January 2020 and longer haulage distances as a result of the Company’s inability to use the Lysii waste rock dump. Of the 20.0 million tonnes mined in the first quarter of 2020, 18.0 million tonnes were capitalized as waste stripping for future production from cut-back 20. Kumtor is currently utilizing the Central Valley waste rock dump in accordance with the revised and approved 2020 mining plan.

Processing costs were $17.4 million in the first quarter of 2020 compared to $17.2 million in the prior year period, due primarily to increased costs associated with higher carbon fine processing, partially offset by lower reagents costs because of processing low oxidized ore.

Site support costs in the first quarter of 2020 were $10.0 million compared to $11.8 million in the same period of 2019, due to lower labour costs as a result of a favourable movement in the local currency exchange rate and lower camp and contractor costs due to continuous improvement initiatives.

Kumtor’s all-in sustaining costs on a by-product basis per ounce sold4, which excludes revenue-based tax, were $644 per ounce in the first quarter of 2020 compared to $553 per ounce in the same prior year period. The increase was mainly due to higher capitalized stripping costs and a $9 million contribution to the Kyrgyz Republic Regional Fund, partially offset by an increase in ounces sold.

The drilling program for 2020 includes 55,000 metres of exploration and 15,000 metres of infill drilling, which are focused on priority and high potential targets. Primary targets include various zones of the Central, Southwestern and Sarytor pits where a recently updated Kumtor resource block model, based on enhanced geological modelling and positive drilling results between 2018 and 2019, demonstrated substantial growth in measured, indicated and inferred mineral resources.

In addition, exploration drilling is expected to resume in the underexplored segments of the Kumtor Gold Trend – the NE Targets, Bordoo, Akbel and conceptual targets (Hope Zone and others).

During the first quarter of 2020, exploration drilling programs continued with the completion of fifty-three diamond drill holes for 13,816 metres and eighteen reverse circulation (RC) drill holes for 2,037 metres. Exploration drilling focused on testing zones of sulfide and oxide mineralization near the surface for additional open pit resources, at the corridor between the Central and Southwest pits (Hockey Stick and Kosholuu zones), on the periphery of the Sarytor Pit, Northeast targets, Muzdusuu area and also on the northeast side of the Central Pit.

Drill collar locations and associated graphics are available at the following link:

Exploration information and other related scientific and technical information in this document regarding the Kumtor Mine were prepared in accordance with the standards of NI 43-101 and were prepared, reviewed, verified and compiled by Boris Kotlyar, a member with the American Institute of Professional Geologists (AIPG), Chief Geologist, Global Exploration with Centerra, who is the qualified person for the purpose of NI 43-101. Sample preparation, analytical techniques, laboratories used and quality assurance-quality control protocols used during the exploration drilling programs are done as described in the Kumtor Technical Report dated December 31, 2014. The Kumtor deposit is described in the 2019 Annual Information Form and the Kumtor Technical Report, which are both filed on SEDAR at www.sedar.com.

During the first three months of 2020, contributions to the national budget in taxes, deductions to the Social Fund and other mandatory payments have totaled 2.82 billion soms. 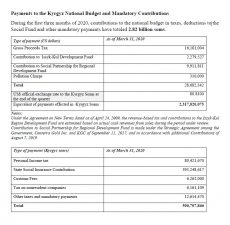 The Kumtor open pit mine, located in the Kyrgyz Republic, is one of the largest gold mines in Central Asia. It has been in production since 1997 and has produced over 12.8 million ounces of gold to March 31, 2020.

Centerra Gold Inc. is a Canadian-based gold mining company focused on operating, developing, exploring and acquiring gold properties in North America, Asia and other markets worldwide and is one of the largest Western-based gold producers in Central Asia. Centerra operates two flagship assets, the Kumtor Mine in the Kyrgyz Republic, the Mount Milligan Mine in British Columbia, Canada and now has a third operating gold mine, the 100%-owned Öksüt Mine in Turkey, which began production in January 2020. Centerra’s shares trade on the Toronto Stock Exchange (TSX) under the symbol CG. The Company is based in Toronto, Ontario, Canada.

The Kyrgyz Republic, via Kyrgyzaltyn JSC, is Centerra Gold’s largest shareholder owning 77,401,766 common shares. As of May 13, 2020, Kyrgyzstan’s interests were estimated at $ 694 million.

Additional information on Centerra Gold Inc. and the full text of the news release on the First Quarter 2020 is available on SEDAR at www.sedar.com and the corporate websites at www.centerragold.com and www.kumtor.kg.