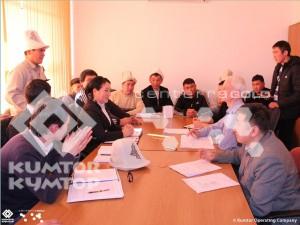 Today, on January 24, 2013, the President of Kumtor Operating Company, Michael Fischer met with a Member of Parliament of the Kyrgyz Republic, Erkingul Imankojoeva, and residents of Jety-Oguz district of Issyk-Kul province.

The parties discussed the issues of employment at the company, and asked to increase transparency of recruitment. Residents of the region asked the Company’s assistance in improving the sanitation conditions in a number of settlements. District representatives also expressed their desire to see more local contractors involved in the work at the Kumtor mine.

In turn, Michael Fischer assured the audience that the Company will be as transparent as possible in recruitment procedures and will involve representatives from public into the selection process.
President of the Company expressed readiness to continue cooperation with the Ministry of Health of the Kyrgyz Republic and medical institutions of the region to improving sanitation conditions, and said that the Company is ready to consider business proposals from local companies and organizations.
According to the data from the second half of 2012 around 30 Kyrgyz Companies were attracted for various works at the mine site, and those Companies employ more than 1,300 Kyrgyzstanis. Eighty six percent of them – are residents of Issyk-Kul province.

Moreover, Michael Fischer said that the Company is ready to fund the feasibility study for the Company, which will process used oil in the region.