Two social projects and a profit-making enterprise were officially launched in Barskoon village on July 19. 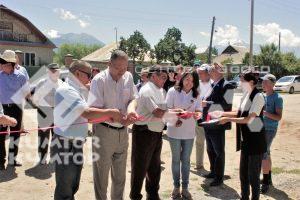 An educational center for village children was opened by joint efforts. Now any child can join the chess club, take lessons in mental arithmetic and hone skills in such traditional national games as toguz korgol. The opening of the center has become possible due to the contribution from the village council, which had allocated KGS 310,000 for renovation of the premises. The Center is housed in the mine’s old camp block, transferred by the Company last year. KGC has also allocated additional KGS 136,000 to equip the premises with necessary office facilities and furniture. 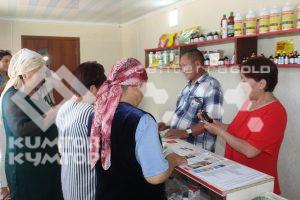 The newly opened veterinary pharmacy is also housed in the building of the Kumtor Mine’s old camp block. The premises were repaired and converted into a veterinary pharmacy, which would provide services, special veterinary medicines and supplies to the farmers of the region.

The ‘Kelechek Plus’ Municipal Enterprise, which manufactures bricks, was also brought into operation with the financial support of KGC. The Company has allocated KGS 700,000 to equip the plant with a power converter and a brick-kiln. It is expected that the plant will employ about 20 workers in the future; today it employs 4 workers.
“Today we are opening the children’s educational center, the veterinary pharmacy and the brick plant. These projects will help to provide a new range of services to the people, but, most importantly, they will create additional jobs in the village. All projects have been implemented thanks to the financial support of Kumtor and I believe that by joint efforts we will be able to achieve even greater results,” said Ruslan Eshmambetov, Head of Barskoon village Council.