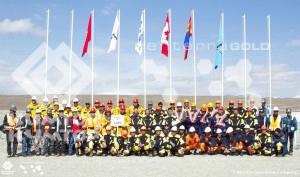 The Kumtor mine has held the 12th annual mine-rescue competition. Participating this year were seven teams representing various departments of KOC, a Boroo Gold team (Mongolia), as well as teams from the Kyrgyz Emergencies Ministry, and Kyrgyzaltyn JSC.

The competition format involved teams responding to a series of mock emergency scenarios including rescue operations in a multi-storey structure, extinguishing fires, evacuation from smoke-filled rooms, and the elimination of the center of chemical contamination. What made the competition especially difficult was that all this was done at an altitude of 4,000 meters, with all team members also carrying special equipment and wearing special outfits.

At the end of the competition, the Mongolian team was recognized as the winner. The second prize went to the Kumtor Site team, and the third placed team was the team from the Kummtor’s Balykchi Marshalling Yard. The three winning teams received prizes, with all participants, receiving special gifts and certificates.

“We are very pleased with the success of the Mongolian team this year, who had the best overall time. The mine-rescue competition at Kumtor has now become an annual event, with the basic aim to test the knowledge and skills of the rescue brigadesmen, exchange experiences between teams, and adopt advanced methods of search-and-rescue techniques. The Kumtor team has shown itself as a team of skilled specialists who are prepared for rescue operations at any time. The KOC operation is stable and free of serious accidents because strict adherence to industrial safety standards is regarded as a top priority by the Company,” said Rodney Stuparyk, Vice-President for Operations, at the prize presentation ceremony.