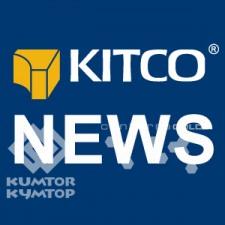 Bucking the trend of losses and impairments, Centerra Gold Inc. (TSX: CG) posted a second quarter profit during a quarter that has seen enormous losses from gold miners.
The Canadian-based gold miner posted a second quarter profit of $1.6 million, or 1 cent per share, compared with a net loss of just under $49 million, or 21 cents per share, in last year’s comparative quarter; the profits were made largely on the back of excellent production from its Kumtor and Boroo mines.

Kyrgyzstan-based Kumtor, Centerra’s flagship mine, produced 72,365 ounces of gold in the quarter, compared to 41,307 ounces last year, while Boroo more than doubled last year’s output, producing 27,061 ounces of gold in the quarter.
“Boroo had very good second quarter and we produced more ounces there than planned from both the mill and the heap leach,” said Ian Atkinson, president and chief executive officer of Centerra, in an interview with Kitco News. “Primarily higher grades through the mill and slightly more on the leach pad went better than planned.

“At Kumtor, our costs are pretty low day-to-day, and it’s really the ounce production that drives the unit cost at the end of the day,” Atkinson said. “You’ll see the real benefit of Kumtor through the end of the year, particularly with the fourth quarter when we’ll produce more than 50% of our ounces for Kumtor, which will have a big impact on our costs at the mine.”

The company is currently working with the Kyrgyz government after the release of a state commission report regarding Kumtor and everything is moving along smoothly.
“We’ve been working with them, we have the technical people at site now, and we’ll continue to meet with the government over the next month, month and a half, working towards that Sept. 10 deadline to make progress in resolving the various issues around Kumtor,” Atkinson said.

Looking ahead, even with a successful quarter given the $400 price drop in the second quarter, Centerra is focused on reducing costs and operating their mines efficiently.
“Like everyone, in view of the significant price drop, and it is significant, we have already made a number of cost reductions and operating efficiency changes,” Atkinson said. “So we have identified already over $50 million worth of cost savings that we’ve applied to the balance of the year.”

Aside from cost cutting and seeking better efficiency at their sites, Centerra finds itself in an envious position as the company’s capital expenditures are very low.
“That’s one key difference between us and our competitors, we don’t have a lot of capital needs going forward to meet our current longer term production plans,” Atkinson said. “Net of our debt, we have $76 million of debt, net of that we’ve got $240 million in cash. Even though we’ll use up some of that in the third quarter, in the fourth quarter when we get back into the higher grade, even with the current gold prices, all our forecasting has been done at $1,250, our cash balance will increase by the end of the year.

“So we do have a strong balance sheet to keep us going through this period of low gold prices,” he added.
As for gold prices, Atkinson believes they’ll track upwards in the medium-to-long term.

“I’m not saying it’s going to go up rapidly, it will go up over time but putting a timeframe on that, that’s a challenge,” Atkinson said. “Right now you have to be prudent, plan for these lower gold price environments and take the steps that many people are doing, looking at reducing their costs and managing their capital.”

By Alex Létourneau of Kitco News