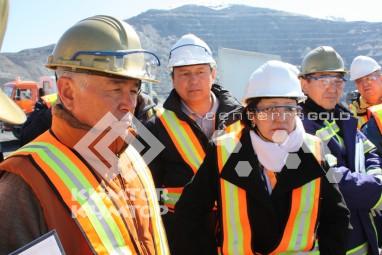 On June 23-24, 2011, a Parliamentary Working Group paid a visit to the Kumtor mine. It was KOC Management’s idea that members of the Working Group and the Jogorku Kenesh Committee for Fuel-and-Energy Complex and Mineral Resources visit the gold mine.

The Working Group visited key mine facilities and met with Kumtor employees. In the presence of experts, samples were taken for heavy metals and cyanide behind the tailings dam, at the point of treated water discharge into the Kumtor River, at some location above and four kilometers below the discharge point, as well as from the River Sary-Tor and from the mud pit.

“Based on the results of our investigations, we have arrived at the conclusion that there are no deviations whatever from the maximum safe level of dust and radiation as well as from foods and potable water standards. Relevant reports will be submitted to the national parliament and disclosed, in due time, by the Parliamentary Working Group,” said Gulushkan Tailakova, head of the First-Response Monitoring Department, the Karakol-based watchdog of the National Health Inspectorate in Issyk-Kul province.