Sponsoring and charitable support to Jety-Oguz District in 2012 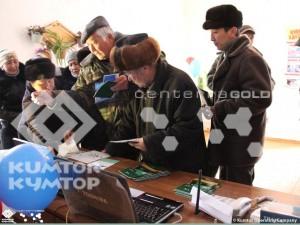 • Community empowerment project in the southern part of Issyk-Kul was launched in Jety-Oguz region with the financial support of Kumtor Operating Company. The project was implemented by “One village – one product” Association. The aim of the project is to combine the efforts of private entrepreneurs and local communities to develop the economic potential of the Issyk-Kul region, through the production of goods from existing local resources. A key principle of the “One Village – One Product” is that the villagers themselves decide what product they are willing to produce. The educational trainings are not the only aspect of the OVOP project. Program participants are also given the opportunity to exhibit their products at Karakol and Bishkek Research Shops, where, according to sales figures, participants will learn the basics needed for marketing and business.
• The total cost of the project is 300 000 USd. In Jety-Oguz region 21 local communities from Baltabay, Jety-Oguz, Boz Beshik, Kyzyl-Suu, Chon Kyzyl Suu, Saruu, Darhan, Barskoon and Ak-Terek villages are involved in this project. The main activities of these communities are production of jam, juice and honey, handcrafts, dried fruits and other.
• Joint project with Kyrgyztelekom JSC for installment of three digital exchanges in Barskoon, Tamga and Tosor villages. From now on, the three communities are provided not only with more advanced telephone services but also with access to the Internet and digital television benefits. Kumtor purchased modern equipment in the total amount of 75 000 USd.
• Due to the shortage of fuel throughout the region in 2012, KOC provided 241 370 litters of diesel fuel for the farmers at a reduced price of 33 soms per liter. The fuel required for the spring sowing campaign was transferred to the region administration with all taxes paid by the Company itself. The payment from the part of Kumtor makes up 1 399 938 soms and is considered as donation.
• Also the Company provided 3 tonnes of diesel fuel to Ak-Shirak aiyl okmotu for repair works of Sook-Ak-Shirak road.

• Barskoon kindergarten was provided with a 40-feet container to be used as coal storage, scrap wood and other material for improvement of playground.

• Kyzyl-Suu kindergarten was provided with 2 trucks of scrap wood.

• Barskoon village administration was provided with 2 trucks of scrap wood for the region’s needs.