Sponsoring and charitable support to Jety-Oguz District in 2013 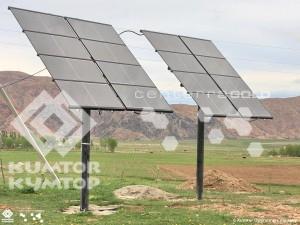 • Joint project with USAID-funded Kyrgyz Agro-Input Enterprise Development (KAED) Project on rehabilitation of two sites with a total acreage of 2,000 hectares in Ak-Dobo and Lipenka rural councils, Issyk-Kul Oblast. The main objective of this joint project is to prevent degradation of agricultural land by restoring soil fertility and rehabilitating irrigation systems. It is planned to complete rehabilitation works in the Ak-Dobo rural council by September 2013 and in the Lipenka rural council by November 2013. The Kumtor’s contribution in this project is 200 000 USd.
• The Kumtor Company and AVEP Public Foundation have launched their joint three-year project, Karagat+, designed to give a boost to communities and expand the potential of the fruit-and-berry market in Kyrgyzstan. The Project area is the Issyk-Kul region, the southern coast of Lake Issyk-Kul in particular. Under this environmentally oriented Project, the Foundation will be training the farmers in the field of growing new varieties of currants, high-yield and cold- and disease-resistant, and innovative irrigation methods. AVEP experts will also provide assistance in creating a network of nursery gardens and farming goods reception centers.
• The total project budget is 900 000 USd. It’s planned to create two nurseries in Jety-Oguz region, in Barskoon and Kyzyl-Suu villages. Two mutual support groups and one demonstration center are created in each of three villages: Orgochor, Darhan and Ak Oston. Also the demonstration center will be established on the base of the technical school in Barskoon village where the project’s participants will be trained.
• In addition, the three-year project on establishment of greenhouses in Issyk-Kul oblast will be launched. The total project cost is 325 000 USd. It’s decided to create one greenhouse on the base of technical school in Barskoon village.

• The joint two-year project “YouthBanks” implemented with Fund Eurasia in the Central Asia (FECA). “YouthBank” is not a financial institution but a bank of young people’s ideas. Young people are involved in developing and running community initiatives for themselves. Each “YouthBank” is composed of a group of 8-10 young people acting as a local grant-making committee. At present time 6 “YouthBanks” are established in Issyk-Kul oblast, two of which are in Jety-Oguz region, Kyzyl-Suu and Tamga villages. All grant-making committee members successfully attended training held by FECA.
• The project’s budget financed by Kumtor is 300 000 USd, 50 000 USd per each “YouthBank”.

• Jety-Oguz Interior Affairs Department was provided with Niva car to help them do better job at the Sary-Moinok post.
• In 2013, KOC decided to provide 287 520 litters of diesel fuel for the region farmers at a reduced price of 34, 5 soms per liter. All taxes were paid by the Company itself. Currently the Jety-Oguz region state administration has received already 180 139 litters. The payment from the part of Kumtor for the litters received makes up 540 964 soms and is considered as donation.