8 naive questions about the Kumtor’s impact on the environment

The State Agency for Environment Protection and Forestry appealed to the Bishkek Inter-District Court claiming to oblige the Canadian gold miner to pay KGS 15 billion. This is the cost of environmental damage caused by Kumtor for 16 years, according to the estimates of environmentalists. The company declined the claim to voluntarily compensate for the damage caused, having referred to the new terms spelled out in the 2009 Agreement, the source in the Agency complained. Komsomolskaya Pravda asked independent environmental expert, Doctor of Geography, Honored Scientist, Professor Emil Shukurov to answer 8 simple questions about the operation of the gold-mining enterprise and its impact on the environment of Kyrgyzstan. And first of all we asked:

1. Where did the amount of KGS 15 billion come from?

“It came out of nowhere. In order to protect something, you should know what you protect, the total number of assets accountable and their condition. Let us assume that we are referring to the wildlife. For many years, the State Agency has been publishing tables listing ecosystems and indicating the area they occupy. But there is no proper accounting. This is particularly true for birds and animals. The figures are simply taken out of thin air.
The amount of the claim most certainly includes the damage caused by Kumtor to the alpine soils. But let me stress that this is a high-altitude area where low-productive ecosystems prevail. Yes, the workers pour wastes on the soil and I will give my both thumbs up to make the gold miner pay for every piece of the land. Only provided that this rule will apply to everybody. Make the deputies, officials and the new Kyrgyz elite pay for the heaps of construction wastes they throw out onto productive soil in the productive area while building their private residences.”

2. What happens to hazardous wastes at the mine?

“Toxic wastes, cyanide compounds are poured into the tailings storage facility. Rumors that it supposedly discharges from time to time and the poison spreads almost all over Naryn River are absolute nonsense. Only ignorant persons can make such statements. Even if we assume that the dam will collapse, the accumulated substance will not flow out of the tank, because it is not a liquid, but a thick paste. Cyanides evaporate very quickly.”

3. Who is to blame for the melting of glaciers?

“The Davydov glacier at Kumtor deposit, roughly speaking, is doomed. It lies on the ore body, and here we must make a choice: either to mine for gold or to completely stop all operations and close the mine. If our ‘environmental experts’ are so concerned about this issue, why don’t they pay the equal attention to other glaciers in the country? Their melting is accelerated by settling dust, which comes not from Kumtor deposit, but from destroyed high-altitude grasslands – jailoo. Wind raises dust from trampled pastures and carries it to the glaciers, thereby accelerating the ice melting. This is much more serious, but for some reason we do not calculate this damage and do not demand from the livestock owners to pay it off.”

4. Who pollutes the Naryn River?

“Mostly Naryn residents do it. The town does not have a normal treatment facility, all untreated sewage waters are discharged into the river. The level of water pollution down the stream is very high. There are suspicions that today a lot of harmful substances get into Naryn river through the fault of the Chinese company that carries out primary mining operations at Jetim-Too mine. It is strange that the company was allowed to work in close vicinity to the Naryn Nature Reserve – the breeding site of Red Book marals. However, nobody lays any claims to the Chinese miners. But there is still cause for concern.”

5. Is the level of radiation lower at Kumtor or in Bishkek? 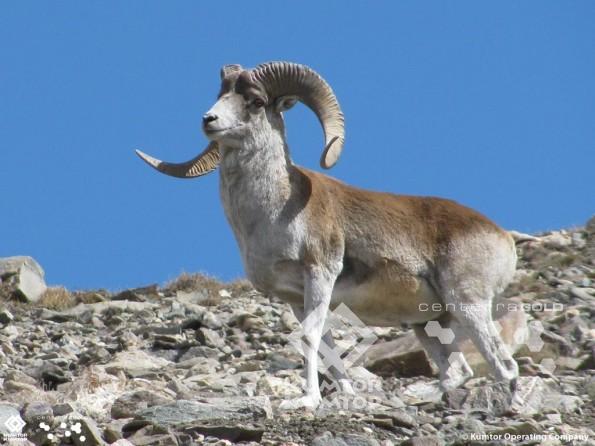 6. Why do Issyk-Kul residents get cancer?

“The locals get cancers, but not because of the dangerous neighborhood. There is no any environmental relation between Kumtor and villages of Jeti-Oguz region. They have the Kadjisay uranium tailings facility, erected without observation of elementary safety measures, which is currently in a horrible state. A friend of mine, geologist, has once swum in Kadji-Say river and has got a radiation disease. Thank God, he had the mild form of disease and was cured. Environmental organizations, which had once conducted research in this area, found radioactive water outcrops even in the beach area of Kadji-Say. They set the ‘No Swimming’ warning signs there, but the locals themselves have stolen these signs. They steal radioactive building materials from Kadamjay. The background radiation in some villages is so high that the counter overshoots near the houses.”

7. Is living in the neighborhood of Kumtor beneficial or detrimental for the snow leopard?

“There are a lot of argali and ibices (preys of the snow leopard) at the mine. And, of course, they enjoy a calmer atmosphere there, because the poachers cannot penetrate into the closed area. Another thing is more surprising. Our environmentalists are totally unconcerned about the conservation of Red Book animals. The Hunting Department under the State Agency increases the issue of game licenses; once they even offered to permit hunting for almost all of the Red Book species, including argali. Obviously, some people are ready to sell their mother nature for few dollars. The hunting for foreign currency has been held since 1990s. The number of hoofed animals has decreased by half over this period, the situation with snow leopards has deteriorated as well. So what did they spend money on?”

8. What will happen to the environment after 2026, when the gold reserves run out and the project is closed?

“If they stop producing gold at Kumtor, it does not mean that all operations will immediately stop as well. I’m sure that reclamation, conservation of the mine will be performed in compliance with all the standards. And there’s one more important moment. The liquid substance in the tailings facility will eventually evaporate and the remaining mass – various minerals, which are in demand in the industry, – could be wisely used. If the Government acts wisely, it will be able to earn profit from it. These tailings are a good source of income and some stakeholders already show a big interest in them.”