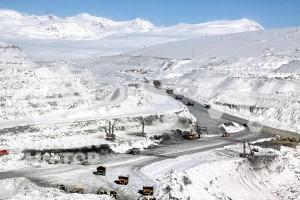 In the third quarter of 2011, total production cost, including depreciation and amortization, was $120.0 million.

Capital expenditures in the third quarter of 2011 were $34.4 million. They consisted of $9.3 million of sustaining capital, predominantly spent for the major overhaul program for heavy duty equipment, the tailings dam lift and other projects.

A complete listing of the drill results and supporting maps for the Kumtor pit have been filed on the System for Electronic Document Analysis and Retrieval (‘SEDAR’) at: www.sedar.com (SEDAR) and http://file.marketwire.com/release/CGQ3-2011Exploration1103.pdf, and are also available at the Company’s web site at: www.centerragold.com.

The capital expenditures for 2011 are estimated to be $186 million, including $152 million of growth capital and $34 million of sustaining capital.

Growth capital investment at Kumtor will be spent primarily on the purchase of seven CAT 789 haul trucks ($21 million), purchase of equipment for the North Wall expansion project ($25 million) and pre-stripping costs related to the development of the open pit ($54 million). Also, $50 million is included in growth capital investment for the development of the underground, of which $43 million has been allocated to advance the two underground declines to continue to develop the SB Zone and Stockwork Zone, as well as, $2 million for delineation drilling and $5 million for capital purchases and other costs.

The largest sustaining capital spending will be on the major overhaul maintenance of the heavy duty mine equipment ($20 million), expenditures for the shear key, buttress and tailings dam construction works ($5 million) and for equipment replacement and other items ($9 million).

Planned exploration expenditures in the Kyrgyz Republic are approximately $14 million, which is higher than the prior guidance of $13 million due to increased drilling activity.

Robert Wunder, President of Kumtor Operating Company, stated: “We are satisfied with the significant operating results achieved at Kumtor in the past quarter. We have managed to reach our planned volume of continued mining operations set at 500,000 tonnes of waste rock per day. The revised gold production guidance at Kumtor has been increased to 580,000 to 600,000 ounces”.

Payments to the KR National Budget and Mandatory Contributions

During the first nine months of 2011, contributions to the Kyrgyz Republic’s national budget in taxes as well as those to the Social Fund and other mandatory payments totaled $119.5 million. According to the official National Bank exchange rate as of September 30, 2011, this is more than KGS 5.378 billion. (See Table 2). Indicated payments do not include received by Kyrgyzaltyn OJSC dividends in the amount of $ 30.2 millions, paid to shareholders of Centerra Gold Inc.in May, 2011.

For reference: mandatory contributions in the nine months of 2010 were KGS 4,530.2 million.

Centerra has become a supporting company of the Extractive Industries Transparency Initiative (“EITI”). Centerra is active in promoting EITI principles both in the Kyrgyz Republic and Mongolia. The Company’s mines operating in these countries were among the first to support the EITI principles, adopt the Initiative’s reporting guidelines and contribute to the improvement of EITI infrastructures in the countries where Centerra mines are operating.

As part of its evolving corporate responsibility efforts, Centerra Gold Inc. contributed $10 million during the quarter for the construction and repair of twenty-seven schools throughout the Kyrgyz Republic.

The Kumtor open pit mine, located in the Kyrgyz Republic, is the largest gold mine in Central Asia operated by a Western-based producer. It has been operating since May 1997 and so far has produced more than 8.2 million ounces, or approximately 256 tonnes of gold.

Centerra Gold Inc. is a growth-oriented, gold Company focused on acquiring, exploring, developing and operating gold properties primarily in Asia, the former Soviet Union and other emerging markets worldwide. Centerra is a leading North American-based gold producer and the largest Western-based gold producer in Central Asia and the former Soviet Union. Centerra’s shares trade on the Toronto Stock Exchange under the symbol CG. The Company is based in Toronto, Canada.

Kyrgyzaltyn JSC is Centerra’s largest shareholder owning approximately 33% of the common shares (77,401,766). As of November 24, 2011, the value of Kyrgyzaltyn’s interest exceeded $1.52 billion.

Additional information on Centerra as well as the full text of Centerra’s news release about Third Quarter Results are available on SEDAR at www.sedar.com and the Company’s website at www.centerragold.com.

(1) One Troy ounce equals to 31.1034768 grams.
(2) Unless specified otherwise, all dollar figures in this news release are in US dollars.

Previous publicationLucidity of Mind is As Good As Gold Next publicationNews release
December 6, 2011