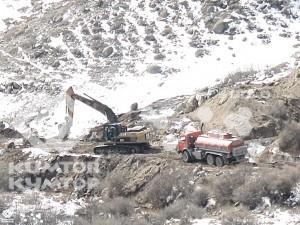 Two communities were left waterless as a result of a mud flow last fall. Kumtor Operating Company has restored and rearranged irrigation canals at Barskoon and Tamga at its own expense.

In September 2011, a mud flow totally destroyed two canals supplying water to Barskoon and Tamga. Especially hard hit was the Tamga community as it had used the destroyed canal for drinking water supply. The spring sowing campaign was under threat of disrupt.

Kumtor Operating Company responded to the requests of the community members by providing equipment and labor to carry out restoration. Partly, it was done back last year even before the onset of subzero temperatures. In March 2012 the work continued. As early as this week, water is expected to arrive at the both communities by their irrigation canals. The company plans to complete renovation work in April 2012.

“Every year, all members of our community would join hands to clear the canal of mess and rocks. But this time we could not eliminate the effects of the mud flow unassisted. We turned to Kumtor for aid and they promptly agreed. Now that the canal has been restored and expanded the villagers will immediately start their field work as we are behind the schedule. The company’s assistance has proved very opportune indeed,” said Bekbolot Akkuluyev, head of the Barskoon ayil okmotu.