Contractors of Kumtor are being transported from the mine site 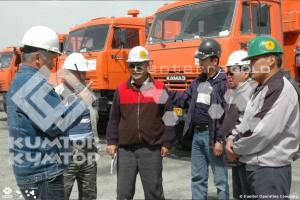 Kumtor Operating Company announced that Management of the Company and Trade Union has agreed on the list of duties that must be maintained despite the suspension of production.

To date, the minimum required work at the factory, in the southeastern part of the central pit, and in the tailings dam is done. Relevant departments of the Company will continue to hold environmental monitoring. Security service ensures compliance with the order at the facilities of the mine. The administration began to transport contractors from Kumtor mine site.

As it was previously reported, Company Management has negotiated with the Trade Union and made a fair proposal to resolve the Social Fund employee contribution issue. The offer remains valid at this time.

Due to the violation of procedures of organizing and arranging the strike, the Company has filed a claim to the Oktyabr district court of Bishkek, asking to recognize the strike illegal.