Michael Fischer: Kumtor will continue its monitoring of Waste Dumps to take all measures required to mitigate any environmental impact 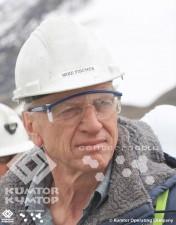 In early May Kumtor Operating Company issued an official statement regarding the waste rock dumps movement at the mine. The Government in the urgent order has established a special commission to inspect the waste-rock dump movement. After members of the Commission visited to the mine site, they voiced their views and preliminary conclusions. Today we offer our readers an opportunity to get acquainted with the opinion of the President of Kumtor Operating Company, Michael Fischer.

– After the visit of experts to the Mine Site numerous comments were made. Why did not the Company notify State authorities in time? Why was destruction of two buildings allowed? Will the substation located below the administrative building be impacted?
– First, reports on movement of waste dumps by monitoring points are sent to the State Inspectorate on Environmental and Technical Safety every month via e-mail. The movement of the Davidov Valley Waste-rock Dump was described in the Kumtor Technical Report and in the life-of-mine plan. These documents were published on Centerra’s website as far back as 20th of December, 2012.

Second, the acceleration of the dump movement was first observed in the middle of March, and in mid-April it increased dramatically. We needed to get a broader understanding of the situation in order to further notify the Government on movement of the dumps and its possible causes. That’s what we actually did at the end of April after receiving advice from experts.

Thirdly, the Maintenance Shop and Administration Building were located in a single facility which was built back in mid-1990s. It should also be mentioned that in 2000 the building experienced settling and deformation due to its location on a permafrost zone. Metal structures were deformed. That is why, according to safety standards, the steel in the structure cannot be reused in construction.
As for the electrical substation and power supply lines, currently, we are preparing for planned relocation of the mine power supply facilities. All related works were provided for in our budget for 2013-2014. These works are on schedule.

– In this situation what is the status of other Mine site facilities: the Mill and Camp?
– These facilities are safe. The Mill is located in an area above the Northern section of the Pit and is in no way threatened by deformation of waste dumps in the Chon-Sarytor River Valley, which is located a significant distance to the West. We will closely monitor the situation around the Camp. The Company’s budget has allocated funds for relocation of infrastructure. In the future we plan to expand the Camp.

– Mr. Fischer, I have to ask you about the environmental consequences. Several opinions were sounded regarding possible environmental disaster like in Mailuu-Suu.
– I want to point out immediately that comparison of the situation in Mailuu-Suu with Kumtor is inadequate and out-of-place. 23 tailings facilities in the vicinity of the Mailuu-Suu Town contain radioactive metals. There are no radioactive elements at Kumtor.

Another principal issue is that the tailings dam at the Mine site is located far from the moving dumps, and is under control of engineers of the Company, and movement of the waste dump will not have any impact on it.

And, most importantly, the company will continue its monitoring of the Central Valley Waste Dump to take all measures required to mitigate any environmental impact.

– What possible solutions do you see in this situation?
– Currently, to minimize pressure on the dumps and reduce their movement we are developing a set of measures that will allow us to change the situation with accelerated movement of the waste dump. We are already working on the plan for deposition of waste rock on other areas. I hope that this plan will be reviewed by the formal commission and pass all required approvals and expertise processes.