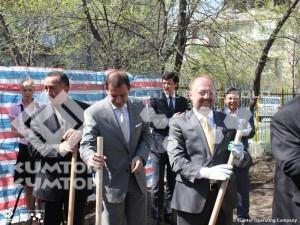 A solemn ceremony of launching the construction of a new dormitory of the Center for Reabilitation of street children was held on April 10 in Bishkek. The event was attended by the mayor of Bishkek, Isa Omurkulov, representatives of the U.S. Agency for International Development (USAID) in Kyrgyz Republic, Hyatt Regency Bishkek, Bishkek Rotary Club and Kumtor Operating Company.

Part of the funds for this project was allocated in the form of financial aid from the governments of the United States and Norway. The other part was collected at a charity evening at the Hyatt Regency Bishkek. In turn, the City Hall has allocated land for construction of the building on a pro bono basis.

Currently there are 70 young people aged 18 to 24 years living in the Center. The new two-storied dormitory, which will be ready by the end of the year, will host another 40 people.

In addition to the building, collected funds will be allocated for the reconstruction of a mini-football field. Children, living in the neighborhood will also be able to play football on the field. Builders promise that the play field will be ready by June 1, 2012.