Operating Results of the Third Quarter of 2019

In August 2019, all conditions precedent in relation to the comprehensive settlement agreement entered into with the Kyrgyz Republic (“the Kyrgyz Government”) on September 11, 2017 were satisfied or waived and the Strategic Agreement closed on August 26, 2019.

Exploration Update
At Kumtor, planned exploration work is aimed at defining additional resources on the flanks of the Central Pit, focusing on the Hockey Stick Zone and the SB Zone deep extension to add to the open pit mine life. Exploration drilling focused on testing zones of mineralization near the surface for additional open pit resources on the north-east side of the Central Pit, at the corridor between the Central and Southwest pits, and on the flanks of the Sarytor target area. During the third quarter of 2019, sixty-seven diamond drill holes for 18,215 metres were completed, including 11,472 metres of infill drilling in the Hockey Stick Zone.

A complete listing of the drill results, drill hole locations and plan map for the Kumtor Mine have been filed on the System for Electronic Document Analysis and Retrieval (‘SEDAR’) at www.sedar.com and are available at the Company’s web site www.centerragold.com.

Financial
For the three months ended September 30, 2019, Kumtor recognized higher revenue and earnings from operations of 64% and 147%, respectively, compared to the prior period. The increase was mainly associated with more ounces sold, higher realized gold price and lower cost of sales per ounce during the period. Cash provided by operations was $31.1 million lower in 2019 when compared to 2018 due to the $62.6 million settlement payment made to the Kyrgyz Republic.

Mining costs including capitalized stripping
Mining costs, including capitalized stripping, were $51.1 million in the third quarter of 2019, a $2 million decrease from the comparative prior year period. Lower costs in the third quarter of 2019 includes lower diesel costs ($3.7 million) due to lower consumption rates from lower tonnes mined and decreased haulage distance. This was offset by higher costs associated with rebuilds when compared to the same prior year period ($1.7 million).

Site Support Costs
Site support costs in the third quarter of 2019 were $11.5 million compared to $12.1 million in 2018, due primarily to slightly lower contractor costs and lower cost of camp supplies. 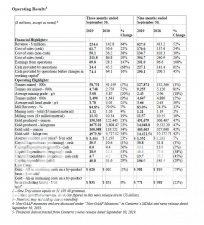 Payments to the Kyrgyz National Budget and Mandatory Contributions
During the nine months of 2019, contributions to the national budget in taxes, deductions to the Social Fund and other mandatory payments have totaled 10.79 billion soms. 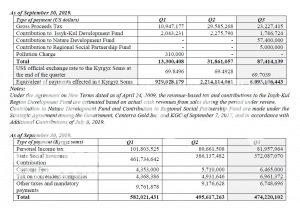 Scott Perry, President and Chief Executive Officer of Centerra stated, “During the quarter we achieved a number of significant Lost Time Injury Free milestones including one full year at Kumtor. These achievements validate that Zero Harm is within our reach at Centerra and demonstrates our workforce’s commitment to Centerra’s Work Safe – Home Safe program as we continue to build a team-based culture of excellence that responsibly delivers sustainable value and growth.”

The Kumtor open pit mine, located in the Kyrgyz Republic, is one of the largest gold mines in Central Asia operated by a Western-based gold producer. It has been in production since 1997 and has produced over 12.5 million ounces of gold to September 30, 2019.

Centerra is a Canadian-based gold mining company focused on operating, developing, exploring and acquiring gold properties worldwide and is one of the largest Western-based gold producers in Central Asia. Centerra’s principal operations are the Kumtor Gold mine located in the Kyrgyz Republic and the Mount Milligan Gold-Copper mine located in British Columbia, Canada. The Company is currently constructing its next gold mine, the Öksüt Project in Turkey, is developing two properties in Canada, the Kemess Project and the Greenstone Gold Project (50% ownership), and has options to acquire exploration joint venture properties in Canada, Finland, Mexico, Sweden, Turkey and the United States. The Company owns various assets included in its Molybdenum Business Unit consisting of the Langeloth metallurgical processing facility and Thompson Creek Mine in the United States of America, and the Endako Mine in British Columbia, Canada.

Centerra’s common shares are listed for trading on the Toronto Stock Exchange under the symbol CG. The Company is based in Toronto, Ontario, Canada.

The Kyrgyz Republic, via Kyrgyzaltyn JSC, is Centerra Gold’s largest shareholder owning 77,401,766 common shares. As of November 14, 2019, Kyrgyzstan’s interests were estimated at $ 637 million.

Additional information on Centerra Gold Inc. and the full text of the news release on the Third Quarter of 2019 are available on SEDAR at www.sedar.com and the corporate websites at www.centerragold.com and www.kumtor.kg.