Centerra Gold – Kumtor Mine Reserves Increase 58% to 9.7 Million Ounces of Gold 5 Year Extension of the Life-of-Mine to 2026 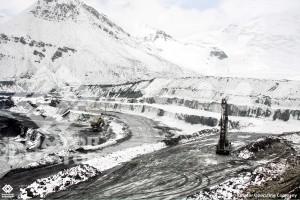 Centerra Gold Inc. (TSX: CG) announces the results of its technical and financial study regarding expanding the Central open pit at the Kumtor mine.

An estimated 3.6 million ounces of proven and probable reserves have been added with the new LOM. After accounting for processing of 172,000 ounces of contained gold to September 30, 2012, Kumtor’s proven and probable mineral reserves now total 9.7 million ounces of contained gold. The new LOM plan is expected to provide a more consistent quarterly production profile after 2013 and is based only on open-pit mineral reserves. There continues to be an opportunity for underground mining beneath the new LOM open pit that will require further exploration drilling and completion of detailed technical studies (please see plan maps, longitudinal and cross sections, available at: http://media3.marketwire.com/docs/KumtorSectionsKS13Maps.pdf).

Using a gold price of $1,350 per ounce and a discount rate of 8%, the new Kumtor open-pit LOM has an NPV of approximately $1.9 billion. The new LOM plan is expected to result in the payment of approximately $1.5 billion in revenue-based taxes, based on $1,350 per ounce gold, along with significant other benefits to the Kyrgyz Republic such as continued local employment, extended procurement of local goods and services and continued support for community sustainable development.