Ian Atkinson, President of Centerra Gold Inc: “Should the memorandum be approved, we will make all our efforts to support the Kyrgyz people” 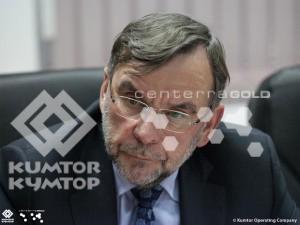 While KR Parliament members have been making efforts to come up with a verdict on Kumtor, Centerra President had a meeting with journalists to rearticulate his position on the Memorandum concluded with KR Government. The second press conference in Bishkek focused on hard negotiations with Kyrgyz authorities and forthcoming shareholders meeting that will have the last say, sad outlooks for the country in case of the agreement denunciation and mutual benefits in case of further project development as well as great potential of Kyrgyz rich subsoil and environmental safety.

It has been the seventh time since the beginning of the year when an aircraft with Ian Atkinson, Centerra President, landed at the “Manas” airport. The Company CEO arrived in Kyrgyzstan on the eve of the important and long-waited event: after lengthy and tiring discussions in the House of KR Parliament, MPs were about to announce a mature decision on Kumtor.

On October 21, Mr. Atkinson had a meeting with KR Prime Minister Jantoroo Satybaldiev and next day’s evening answered the questions of journalists articulating some details of the meeting with the KR Prime Minister. In particular, it related to the report developed by AMEC Earth and Environmental UK LTD. The international consultant for mining and technical issues retained by the Kyrgyz Party acknowledges that Kumtor is one of the mines located in the most difficult nature conditions. There are very few companies that that would be able to handle such a difficult task at 4,000 meters above the sea level – foremost due to technical issues. However, despite all the above Centerra develops the mine in permafrost conditions in compliance with high environmental standards. Mining always has an impact on environment. Meanwhile, even AMEC notes in its report that there is no material impact on human health and environment at the Kumtor Mine site.

– We try to have continuous improvement and in this regard we intend to closely follow recommendations developed by the independent international consultant – stated Ian Atkinson. In particular, yesterday I informed KR Prime Minister that the company is willing to implement one of the AMEC demands regarding water quality monitoring near Naryn.
Both for you and us

This meeting with Kyrgyz authorities was far away from being the first and it seemed to be not the last. According to President of Centerra Gold Inc., lengthy negotiations to enter into the Memorandum of Understanding between the Parties were quite difficult. The Canadians decided to make some concessions to reach a consensus but the global market reacted to that by Centerra share price drop. Devaluation made up 30%. Also, international analysts expressed a cautious support to the Memorandum. To remind you, the agreement provides that Kyrgyzstan will become a partner enjoying full rights in the Project management and its interest will make 50%. Kyrgyzaltyn and Centerra will be equally presented in the Board of Directors plus more than 60% of revenues will be left in the country as taxes and dividends. According to the Canadian Party, disputes in the joint venture will be resolved by discussions and exchange of opinions. Cooperation period with Kyrgyzaltyn has been long with one goal in mind – to ensure continuous operations at the mine site. Any disagreement can be overcome and optimal decision can be reached by joint efforts. By the way, the deposit developers has a solid Mine Plan up to 2026 that Kyrgyzaltyn is well aware of, and both Parties intend to adhere to it. Taking into consideration that the profits distribution interests are planned to be equal, this will motivate the parties to an agreement to have good performance in the joint venture and eventually will demonstrate to the foreign investors that Kyrgyzstan is a reliable destination for business.

By the way, despite the support provided to the Memorandum by Centerra Gold Inc., the Special Shareholders Meeting will have the last say. This very Meeting will give approval given bilateral agreement will satisfy both Parties. These are the rules of the game. Any agreements with Kyrgyz Government should be supported by Centerra shareholders followed by the approval process in Canadian courts.

– Centerra is always willing to cooperate with KR Government to ensure continuous operations at Kumtor. There have been many consultations from the beginning of the year by retaining independent consultants to restructure the Project in order to receive maximum benefits for Kyrgyzstan, meanwhile, protecting interests of Centerra shareholders. We are certain that the proposed draft restructuring meets the country’s demands and gives definite benefits to the country.

Unfortunately, this very difficult restructuring process becomes overgrown with misunderstanding of misinformed and misled people with regard to both past and present company’s work. Thus, back in 2004 when Centerra just entered the Project, the life of mine was till 2009 only. However, thanks to Kumtor gigantic work and billion dollars of Centerra investments in exploration and equipment, it managed to extend the life of mine till 2026. The timeframe may be further extended given continuous operations and additional investments made into the Project.

– There is an opinion in Kyrgyzstan that gold bullions are exported from the country but this is far from being true (Note: Kyrgyzaltyn has an exclusive right to sell refined gold in the country and abroad).
Centerra has made a large volume of reinvestment in the mine and implemented many social projects in the Issyk-Kul region including repair and construction of schools, roads, establishment of microcredit agencies, and development of the agricultural sector. 96% of all the company employees are Kyrgyz nationals. Moreover, the company constantly implements the training program aimed at increasing local employees and this no doubt will benefit the country – emphasizes President of Centerra Gold Inc.

Replying to the question asked by Komsolmolskaya Pravda regarding whether speculations around Kumtor will disappear and whether the new agreement will fully meet hopes and expectations of the people who constantly participate in protest actions, Ian Atkinson noted that if ‘the deal comes into effect, this will satisfy interests of all stakeholders including foremost people.”

– Should the KR Parliament approve the Memorandum, we will make all our efforts to support people of Kyrgyzstan. On the whole, the position of the Parliament members will reflect the position of the entire people since the people elected MPs – reasons Mr. Atkinson. – Anyway, in all democratic countries, people have the right to express their opinions and this cannot be oppressed. We will simply work. I do not want to speculate here about consequences of a possible denunciation of the Agreement of 2009. Nevertheless, in this case Centerra will have to protect interests of its shareholders and defend its rights. However, we are optimistic and plan to continue working with the Kyrgyz Government to approve the Memorandum and sign a new mutually beneficial agreement based on it. If we succeed, this will be the best evidence that Kyrgyzstan is open to foreign investments.

Over 6 months of 2013 the Kumtor mine with 3,700 employees (including 1,000 contractors) has produced in excess of 5 thousand kg of gold. Taxes and other mandatory payments have amounted to 2 billion 826 million soms. The contribution to the Issyk-Kul Development Fund has made 3 million 880 thousand US dollars, environmental fee – $310 thousand. Gold production increase in the last quarter of 2013 will be secured by high-grade SB zone. Mining in this area will enable to produce estimated 550-600 thousand ounces of gold. Total capital costs will reach $97 million.